Led Zeppelin is truly a tough act to follow. But Led Zeppelin Tribute band ZOSO has grown in leaps and bounds. Following in the footsteps and recreating the spirit of the times and the heydays of Led Zeppelin is the one things that Zozo's into for the past 25 years, touring cities and states around the country. One of their tour legs of 2019 will take them to this side of town. On Friday 15th February 2019, Zoso will hit the Stage AE to give their fans a riveting Led Zep tribute performance. Join them in their cause to keep the Led Zeppelin songbook alive. Lock-in this date and book your ticket to a night where Led Zeppelin fans will converge give a whole lotta love and climb their way up the stairway to rock n' roll heaven! 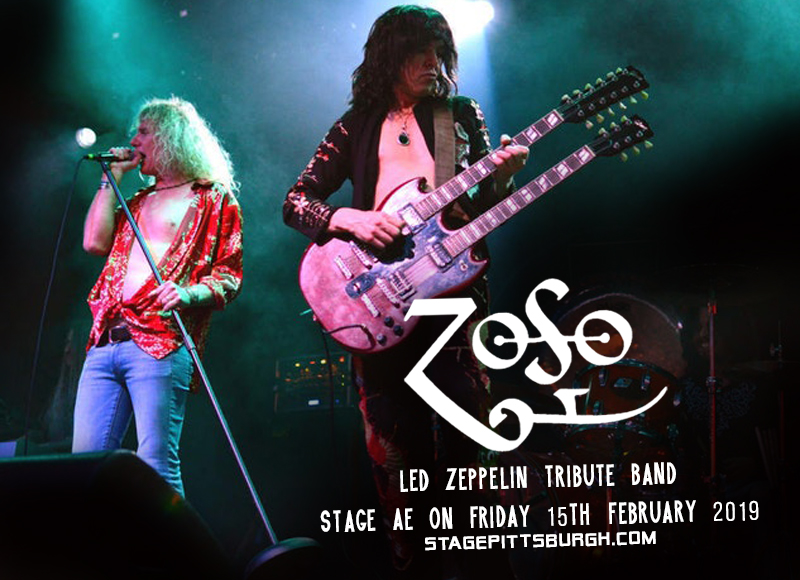 The breadth and depth of influence that Led Zeppelin has sowed among artists in musicians of various generations are truly immeasurable and undeniable. Zoso, is one of the many bands from sunny California who took Led Zeppelin's influence on their music a notch higher. Way back in 1995, they vowed to not just do a one-off tribute. Each band member was carefully chosen not only for their precise note-for-note playing abilities, spot-on vocals and masterful renditions of Led Zep repertoire, but hand-picked to embody the passionate spirit, the creative aura, and the mesmerizing genius of each Led Zeppelin band member. The lineup then which includes Matt Jernigan (as Robert Plant), John McDaniel (as Jimmy Page), Adam Sandling (as John Paul Jones) and Bevan Davies (as John Bonham), are on their 25th year of playing. Their attention to detail and determination for an accurate portrayal of rock music's biggest guitar heroes paid off.

Fans, audiences, and the press are convinced and unanimous in saying:

"Head and shoulders above all other Zeppelin tributes" – Los Angeles Times

"The most exacting of the Zeppelin tribute bands in existence." – St. Petersburg Times

"The closest to the original of any tribute." -The Chicago Sun-Times

Zoso indeed truly lives up to their concert billing as "The Ultimate Led Zeppelin Experience" you'll ever get.