The Alternative indie rockers – Wolf Alice are coming to Stage AE on Thursday 13th July 2017!
Wolf Alice have been hitting the big time back in their home country in the UK, with their groundbreaking songs and live performances that have every one talking, like their appearance at the major festival Glastonbury. With the energy surrounding their career – they are now taking over the U.S! Book your tickets here and catch them this Summer!! 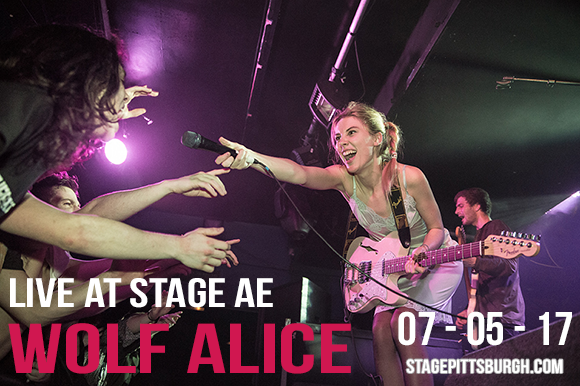 The four piece, Wolf Alice have been hyping up and causing quite the stir, their incredible set takes the crowd on a journey through the classic sounds to modern rock. With the female front of Ellie Rowsell (on vocals, guitar), Joff Oddie (guitars, vocals), Theo Ellis (bass), and Joel Amey (drums, vocals).

Their 2014 release of "Moaning Lisa Smile" hit the number 9 spot on the on Billboard Alternative Songs and was nominated for the Grammy Award for Best Rock Performance for the 2016 Grammys! A great success for an upcoming band… catch them as they now embark across North America! Here's your chance!!