Why Don't We Tickets

YOU ARE INVITED… to the hottest tour of 2018 from the freshest new boy band on the scene! That’s right, it’s Why Don’t We, coming to the Stage AE LIVE on Thursday 19th April 2018 with their brand new album “Invitation”! Don’t miss out – get your tickets to see the best new thing in pop NOW! 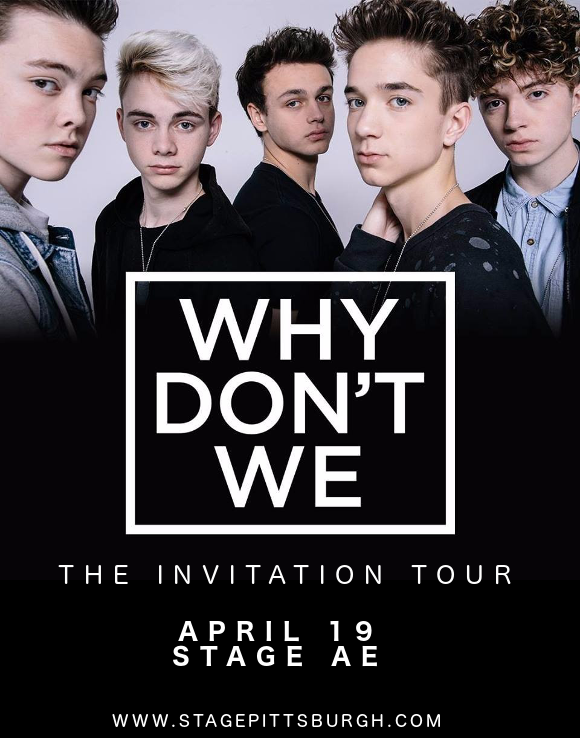 Formed in September 2016 and comprised of five solo artists; Zachary "Zach" Herron, Corbyn Besson, Jack Avery Jonah Marais, and Daniel Seavey, the group took the world by storm with their first single, “Taking You”, from their first EP, the aptly named, “Only The Beginning,” released just two months following the band’s formation! Their second EP, “Something Different,” was released in April 2017 with a big North American tour, further boosting their already skyrocketing popularity.

With the release of their third EP “Invitation,” they reached an important milestone in their career – topping the iTunes chart for overall albums!! Now, the band is getting prepped for what looks like its going to be their biggest and boldest tour get. Get ready to experience all the new songs live in addition to all the hits you know and love – what are you waiting for??? Get your tickets to see Why Don’t We LIVE on Thursday 19th April at Pittsburgh’s Stage AE NOW – while they still last!!