Walk Off The Earth Tickets

Multi-instrumentalist YouTube sensations Walk Off The Earth are headed to Stage AE on Friday 24th May 2019 as part of their 2019 World Tour! The Juno Award-winning indie pop band, known for their astounding one-guitar-five-musicians cover of Gotye's "Somebody That I Used to Know", will be performing in support of a brand new album – their first since 2015! Expect incredible feats of musical wizardry from this phenomenally talented group! 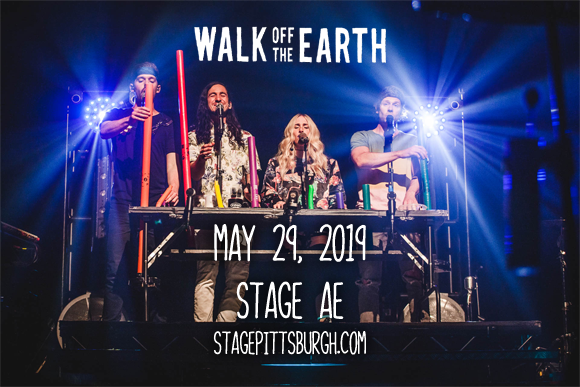 Canadian indie pop band Walk off the Earth formed in Burlington, Ontario in 2006. The group found international fame in 2012 when their video of a cover of Gotye's "Somebody That I Used to Know" went viral on YouTube, receiving over 175 million views in only four months. Consisting of multi-instrumentalists Gianni "Luminati" Nicassio, Sarah Blackwood, Ryan Marshall, Mike "Beard Guy" Taylor and Joel Cassady, the band continues to be known for its YouTube videos of pop covers that feature a variety of unusual instruments including: melodica, beatbox, kalimba, harpejji and whirly tube, as well as sample looping. To date, the group has released four albums on Slapdash Records (2007's Smooth Like Stone on the Beach, 2010's My Rock, 2012's Vol. 1 and Vol. 2) and two studio albums with Columbia (2013's R.E.V.O. and 2015's Sing It All Away), who they signed a recording contract with in 2012.