Hardcore fans, are you ready for UNDEROATH?? With their brand new album “Erase Me,” they’re breaking a long hiatus and returning to fans in 2018. On Tuesday 4th December 2018, they’re hitting the stage with incredible support from Dance Gavin Dance, The Plot In You, and one secret guest yet-to-be-announced!! It’s all looking very exciting so far – get ready to welcome your favorite rock band back to the stage on December 4th!! Hit the “Buy Tickets” button now to be sure of your place at the show! 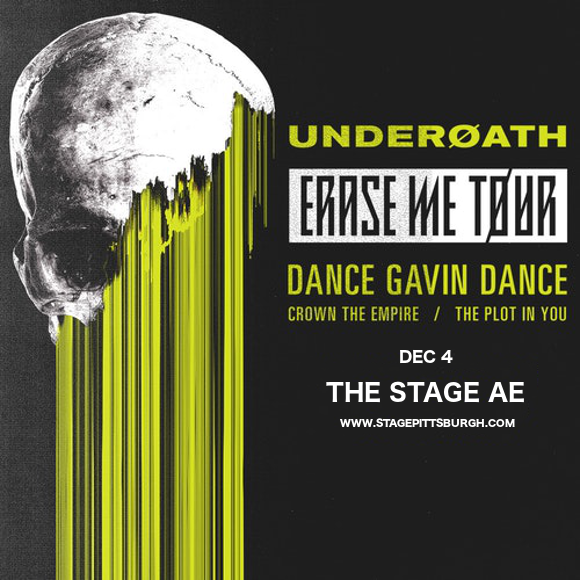 Currently consisting of Aaron Gillespie, Christopher Dudley, Timothy McTague, Grant Brandell, James Smith, and Spencer Chamberlain, Underoath have been steadily leading the Christian metalcore genre since 1997. “Erase Me,” is their first album in 8 years, since “Ø (Disambiguation)” in 2010. The critically-acclaimed album marks a triumphant return to form for the band, and Underoath are just as excited for the upcoming tour as fans are!

“We’re dang excited to finally announce the Erase Me U.S tour," said Chris Dudley, they band’s keyboardist, in an interview. "We're bringing along Dance Gavin Dance, a special guest that we think people are going to be pretty pumped on, and The Plot In You…We’ve also already started working hard on the show itself to make it something unlike anything we've done before. So, between that and the lineup, this is basically gonna be insane.”

Listen to the song “On My Teeth,” from the new album below – but don’t wait too long to get tickets, they’re expected to get snapped up fast!!