Are you ready for a tripped-out time with one of the most engaging and entertaining jam-bands out there? Umphrey’s McGee comes to Stage AE on Friday 22nd March 2019 on the Wax On, Wax Off Tour! The psychedelic improv masters will be performing tracks from their prolific career, getting everyone in the mood to boogie!

"Like a well worn groove on your favorite record, Umphrey’s McGee is back at it in 2019. We are pleased to bring you a fresh batch of tour dates in the Wax On, Wax Off Tour," said the band in a statement. 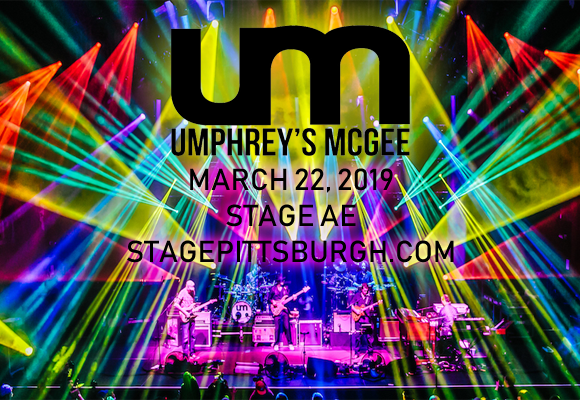 Formed in 1997 at the University of Notre Dame, where many of its current members were students at the time, Umprey's McGee is an American jam band. The result of two college bands merging (Tashi Station and Stomper Bob), the group released its debut album, the ironically-titled Greatest Hits Vol. III, in 1998 after only eight months together. After amassing a large and loyal local fanbase and adding more members to the band, the group began to play outside of Indiana and started focussing its attention on improvisational practices, honing its skillset. Their 2002 album, Local Band Does OK, featured a full band line-up and forays into experimental progressive rock, defining the group's sound. That year, they performed at the inaugural Bonnaroo Festival in front of nearly 100,000 people. They began an extensive touring schedule that saw them playing over 150 shows a year, from which they garnered a cult following, and by 2004, Umphrey's McGee was tipped by  Rolling Stone to "have become odds-on favorites in the next-Phish sweepstakes." To date, the group has released 13 studio albums, 13 live albums and 10 live DVDs.