Tyler The Creator is hitting the road for a world tour this summer, coming to Stage AE on Tuesday 24th September 2019! The Igor Tour sees the Odd Future rapper promoting his smash hit, record-breaking, number one album of the same name, so fans can expect to hear all his hot new tunes, including "Earfquake! He'll be joined in support by Goldlink and Jayden Smith, making one sweet line-up! 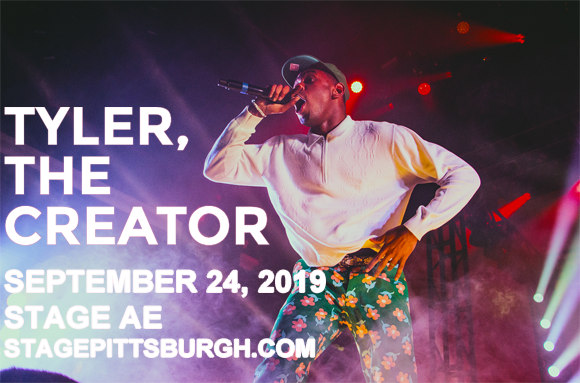 Tyler the Creator is an American rapper, record producer, and music video director, who began his hip hop career in 2006 as leader and co-founder of the alternative hip-hop collective Odd Futures, alongside Left Brain, Hodgy Beats and Jasper Dolphin. He produced his first solo mixtape, Bastard, in 2009, followed by his debut album, Goblin, which was released with XL Recordings in 2011. The album debuted at number five on the Billboard 200 chart, launching his breakthrough hit “Yonkers”, the video for which won the MTV Video Music Award for Best New Artist at the 2011 MTV Video Music Awards. That same year, Tyler the Creator signed a joint venture deal for him and his label Odd Future Records, with RED Distribution and Sony Music Entertainment. To date, he has released four studio albums, all of which have debuted in the top five of the Billboard 200, including his recent number one album, Igor (2019).