It's a love connection! Get ready to meet hardcore punk rockers Turnstile, together with indie rock sensation Snail Mail, performing live at Stage AE on Wednesday, November 16th, 2022. Turnstile is embarking on 'The Turnstile Love Connection Tour' in support of their latest album "Glow On". The album features their new hits "Mystery", "Blackout", and "New Heart Design". Forbes hailed the record as "a hardcore album for the ages". So, don't miss out on the hardcore band's new tour that takes punk and rock to another level by booking your tickets now! 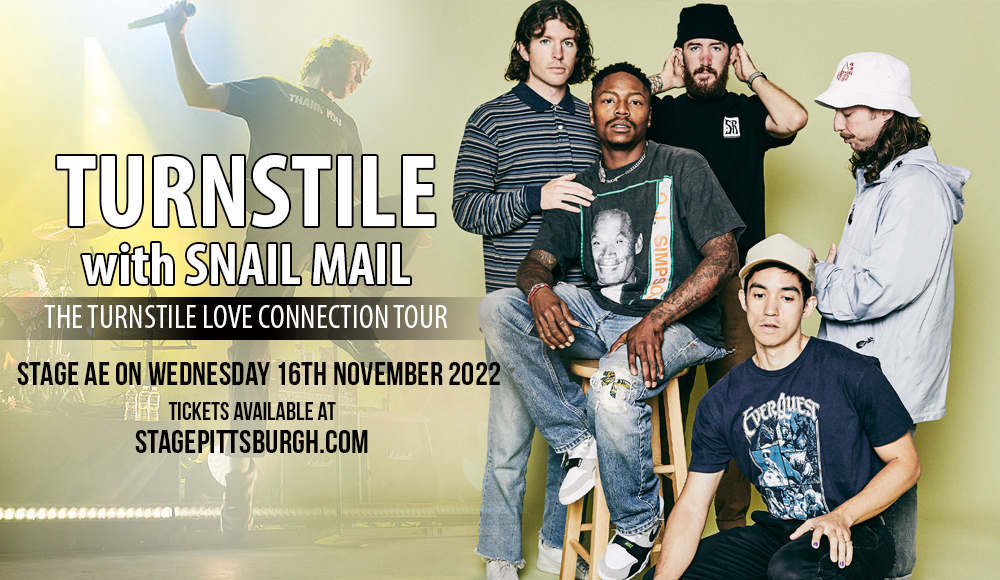 Emerging out of Baltimore's hardcore music scene, Turnstile dropped their first EP "Pressure to Succeed" in 2011. It wasn't until 2016 when the band quickly amassed a new following with the release of their third EP "Move Thru Me" which charted at #14 on the Billboard Heatseekers Album Chart, and #19 on the Hard Rock Albums chart. They embarked on a tour and then released their sophomore album "Time & Space" in 2018. NME hailed them as "the new shape of punk to come".

Set to disrupt the status quo, Turnstile attracted listeners for their unique hardcore punk and alt-rock tracks. Last August of 2021, the band released their third studio record "Glow On" which features their hits "Mystery" and "Blackout". The band also recently dropped a new video for their song "New Heart Design" shot on film from the first leg of their Love Connection Tour.

Forbes described the new album as a "hardcore album for the ages". "The band isn’t churning out simple meat & potatoes hardcore songs, but rather some of the catchiest and stylistically intuitive hardcore songs yet" said Quentin Singer of Forbes in a review of "Glow On".

"I think we never intentionally try to expand [Turnstile’s sound]," lead vocalist Brendan Yates told SPIN. "Everything is just a reflection of what we really want to do, so it’s always felt the same. We always leave the door open for endless possibilities when it comes to making a song or trying things. If a song feels good, we just kind of let it happen. That process has always been the same for us, and I think this record was the result of that."

The Baltimore hardcore punk rockers are set to dominate soundwaves, and throw big electrifying shows at The Love Connection Tour. So, don't miss out on Turnstile's stage domination at Stage AE, together with Snail Mail, by booking your tickets now!