Fans of Tool, get ready for the experience of a lifetime!! The famously secretive metal band have announced a special series of intimate meet-and-greet workshops where the band will discuss the secret techniques and strategies behind their genre-defying sound. It’s a must for any serious Tool fan. The Tool Music Clinic comes to Stage AE on Monday 21st May 2018 – get your tickets NOW!! 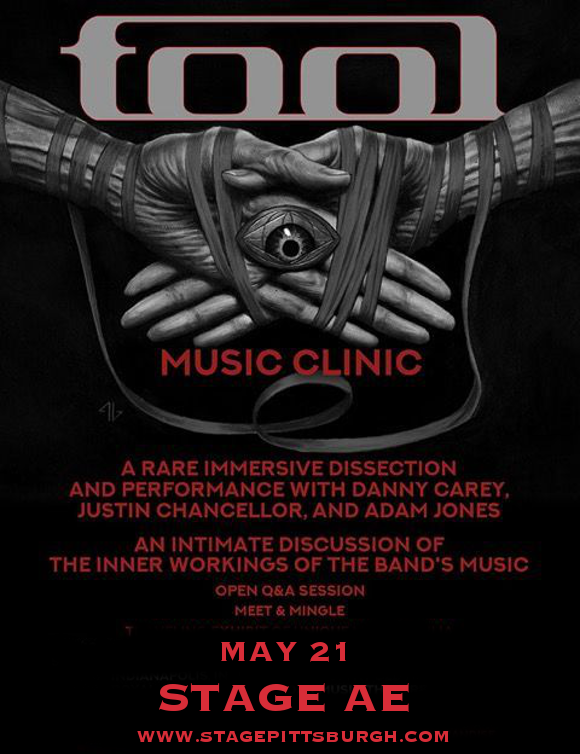 Formed in 1990 and currently consisting of band members Danny Carey, Adam Jones, Maynard James Keenan, and Justin Chancellor, Tool emerged on the heavy metal scene in 1993 with their album “Undertow”. As time went on, they became a prominent force in the alternative metal genre, aiming to deliver a message of personal growth through the combined mediums of experimental music in the art rock, progressive rock, and psychedelic rock genres with visual arts. Today, Tool are widely regarded as a style-bending musical force that have influenced many other acts since with their innovative musical vision and incorporation of the visual elements.

The Tool Music Clinic, as well as providing fans with a unique, never-before-seen insight behind the scenes, an opportunity to directly ask the band members questions, and exclusive merchandise, will also feature a live performance of some of the songs. No Tool fan can afford to miss this – get your tickets NOW for this one-in-a-lifetime opportunity while they last!!