Unparalleled when it comes to live performance, eccentric psychedelic rocks The Flaming Lips will be coming to Stage AE on Friday 24th August 2018 for a trippy night of colorful music and mayhem! Promoting their brand new album, Oczy Mlody, the Miley Cyrus collaborators always dazzle and amaze with their captivating performances, props and general on-stage craziness – don't miss out! 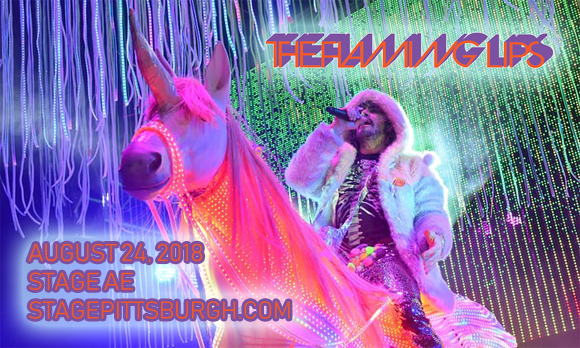 American rock band The Flaming Lips formed in Oklahoma City, Oklahoma in 1983. After several independent releases in the 1980s and early 1990s through indie label Restless, the band signed to Warner Brothers, releasing their major-label debut Hit to Death in the Future in 1992. The band's 1999 album The Soft Bulletin was NME magazine's Album of the Year, and 2002's Yoshimi Battles the Pink Robots was a mainstream hit for the band. The Flaming Lips have won three Grammy Awards, including two for Best Rock Instrumental Performance and in 2002 they were placed on Q magazine 's list of the "50 Bands to See Before You Die".