Rock n’ roll fans, get ready for a fun night!! The Clarks are back with a big North American tour, coming to the Stage AE on Saturday 16th June 2018!! Tickets on sale now – grab ‘em while they last!! 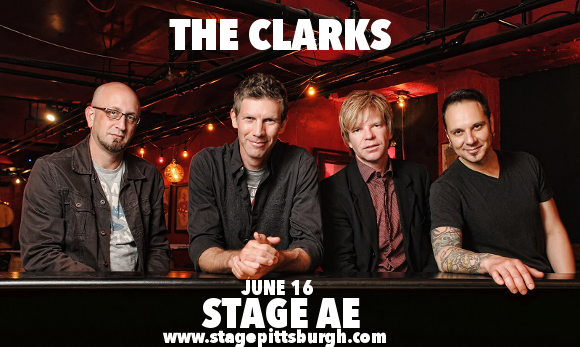 With the same line-up since 1986 of friends since university Scott Blasey, Rob James, Greg Joseph and Dave Minarik, no band quite knows how to do good old-fashioned rock n’ roll like The Clarks!! So-called because the band are "big fans of Lewis and Clark,” The Clarks startes out playing mostly cover songs and gaining huge popularity in their hometown of Pittsburgh. Their rising success did not go unnoticed, and the band quickly gained major attention and were booked for national tours, and over time, began to create a blueprint to start creating their own music. Today, the band’s repertoire spans 12 studio, live and solo releases, and sales of almost a quarter of a million!! Now, the band are touring with their latest album, “Rewind,” of 2015, an album comprised entirely of much-loved covers played by the band during their early formation years. Now, you have a chance to revisit those years and hear it all happening live once again.

What are you waiting for?? Grab your tickets to see The Clarks NOW while you still can!!