After his 2020 Enterfear Tour was forced to be postponed due to Covid-19, Tech N9ne got to work on a brand new show for 2021 – the appropriately titled Strange New World Tour! The rapper, known for his lightning-fast, aggressive flow, has been hustling hard to get something insane together for the stage, and he has a stacked support line-up for the stint, including Krizz Kaliko, Jelly Roll & King Iso! Tech N9ne comes to Stage AE on Wednesday 3rd November 2021! All tickets originally purchased for the Enterfear Tour on Sunday 17th May 2020/Sunday 30th May 2021 are valid for this event. 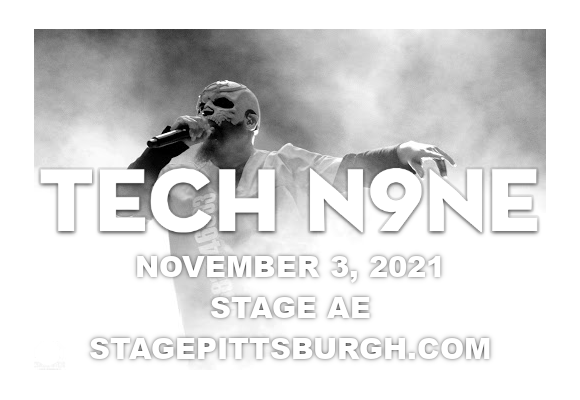 Tech N9ne is an American rapper, singer, songwriter, record producer, actor, and entrepreneur who has reinvented himself over the years from his early days as a horrorcore rapper to becoming one of the hottest underground hip hop acts around! He made his debut in 1999 with the album Calm Before the Storm, and found some success in the early-2000s, but his big break came in 2008 with Killer, his seventh studio album, which reached number 12 on the Billboard 200. 2011's All 6's and 7's features collaborations with Lil Wayne, B.o.B, Kendrick Lamar, Twista, T-Pain, and Snoop Dogg, and reached number one on the Billboard Top R&B/Hip-Hop Albums Chart and the Independent Albums chart, as well as the top five on the Billboard 200. Something Else (2013), Strangeulation (2014), and Special Effects (2015) also all reached the top five of the chart. HE released his 22nd, and most recent, studio album in April 2020.