Tech N9ne is cruising down the hiphop highway with his ‘Independent Powerhouse Tour 2016’. He is topping the bill, and will also feature 6 other hiphop and rap stars on the rise, whom he took under his wings as signed artists of his indie label Strange Music.

Tech N9ne is loaded and heavily armed with fast, hard, solid rhymes that his legions of die-hard fans are dying to experience. Expect a rampage as his ‘crew’ goes out to buy tickets to the show. If you’re not fast enough, you’ll be left out in the cold. As the cliche’ goes, ‘if you can’t beat ‘em, join em!’. Run for your tickets now! 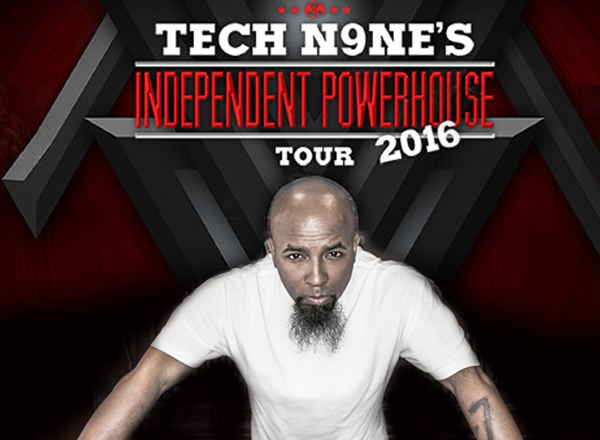 Tech N9ne is a rap and hip-hop artist and so much more. Allmusic reviewer Jason Birchmeier calls his style "bizarre hardcore rap." Some call it ‘horror core’. But whatever it is, his fans are simply in awe of his fast rhyming, speed rap abilities known as the Chopper style.

Tech N9ne (pronounced Tech Nine), explains that these two words that make up his name aptly describes his master craft. “Tech” stands from ‘complete technique of rhyme’; while “nine” represents the number of completion. He was a former member of the 90s hard-hitting rap group Black Mafia. In the early 2000s, he started gaining steam as a solo artist. His album sales have reached the two million mark; while his music has been featured in film, TV, and video games.