Steel Panther fans listen up! is no exception! The nation’s favorite comedy metal band is on tour with their latest album “Lower The Bar,” in 2018 – coming to Stage AE on Wednesday 2nd May 2018! Get your bandanas and flared out the wardrobe and prepare for a show that’s rude, raucous and raunchy in true Steel Panther style – grab your tickets today, while they last!! 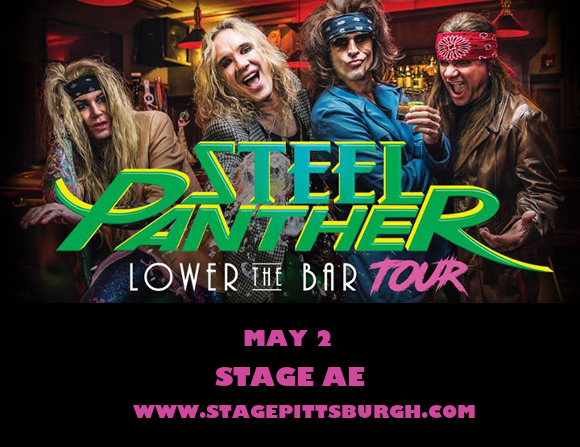 Formed in 2000 by members Ralph Saenz "Michael Starr”, Travis Haley "Lexxi Foxx”, Russ Parrish “Satchel", and Darren Leader "Stix Zadinia”, Steel Panther started out covering 80s hits and parodying hair metal of the time. As their popularity grew their exaggerated band persona evolved into an act all on it’s own. With their debut album, “Feel the Steel,” in 2009, Steel Panther hit the top of the Billboard Comedy Charts and introduced to them to the world at large. Their success continued to grow – their next album, “Balls Out,” hit No. 1 on the UK iTunes Rock Chart and No. 4 on the US iTunes Rock chart, as well as taking top spot on the Billboard Comedy Chart once again!

In March last year, Steel Panther released “Lower the Bar,” their first album to depart slightly from their flamboyant parody image and focus slightly more on themselves – don’t worry though, the band have confirmed they have no plans to “alienate their core audience”.

Get ready for a Steel Panther party on May 2nd – have you got your tickets yet??