Steel Panther comes to Stage AE on Sunday 22nd May 2016

If you missed the boat that sailed over the glam rock wave of the 80s, or just simply want to relive the pretty good times of the hair metal era, then spending one evening with Steel Panther is just the perfect excuse! This show is an electrifying treat for glam rock fans, or simply a rollicking comedy for everyone to enjoy and have a barrel full laughs. Don't miss this wild ride back when the boys had pretty long locks, skin tight spandex, and a dash of guyliner…Get your tickets now! 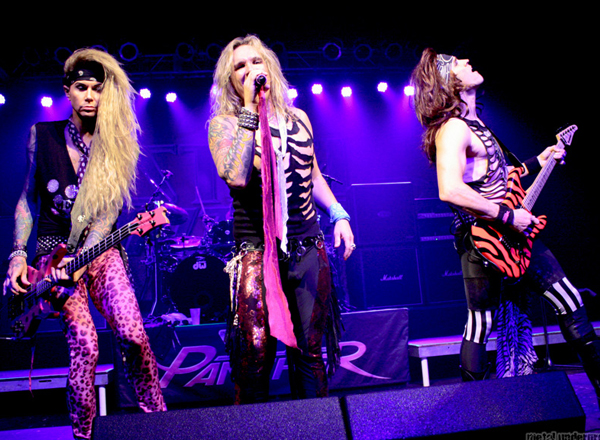 We've all gone through that hair band phase, but there are some who just can't seem to shake it off. Step right up and brace yourselves for a wild ride that would take you back to the time when spandex, guyliner, golden long locks were fab…now, Steel Panther also makes it funny!

This rock musical-parody features the quartet of 'Michael Starr' (Ralph Saenz, vocals), 'Stix Zadinia' (Darren Leader, drums), 'Lexxi Foxx' (Travis Haley, bass) and 'Satchel' (Russ Parrish), who started performing in the early 2000s at the Sunset Strip. They gained fame and notoriety through their hilarious take of covering 80s songs, poking fun at hair bands and rock star lifestyles of 80s glam rock bands. Steel Panther has released three original studio albums to date: Feel the Steel (2009), Balls Out (2011), and All You Can Eat (2014), which spawned these chart-topping singles: "Party Like Tomorrow is the End of the World," "The Burden of Being Wonderful," "You're Beautiful When You Don't Talk," and "Gloryhole." They also earned much praise and adulation from fans and critics alike with their renditions of hair band classics like "Don't Stop Believing," "I want It That Way," and "Eyes of a Panther."