MASSIVE news for all fans of St. Vincent! The phenomenal guitarist, singer and songwriter has announced her upcoming “Fear The Future,” tour, coming live to the Stage AE on Tuesday 9th January 2018! Known for her high-energy and intense live performances, St. Vincent promises a show unlike anything you’ve ever seen before! No fan can afford to miss it – get your St. Vincent tickets NOW while they last!! 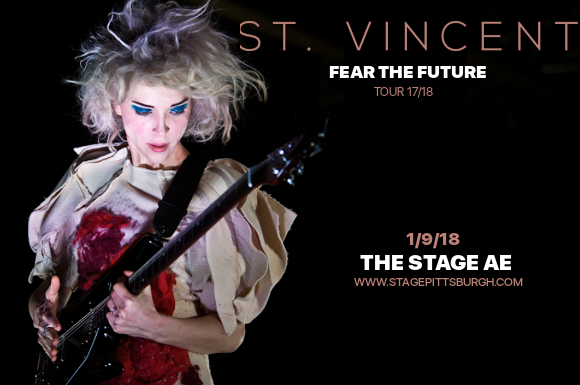 Known for her unusual signature sound, bizarre videos, and complex, multi-layered lyrics, news of St. Vincent’s brand new tour was made public in standard, cryptically loaded-with-meaning St. Vincent fashion – this time, a video on her website featuring her standing and coughing at a pink podium.

The latest work by St. Vincent – also known as Annie Clark – is entitled “Masseduction”, out October 13th. Although her last album, 2014’s “St Vincent,” won a Grammy, the musician is far from finished. "This one’s better,” she said, simply, when asked to compare “Massseduction” to her previous work. “I was focused on writing the best songs I’d ever written."

The songs “Los Ageless,” and “New York,” have already been released. Check out the quirky video “Los Ageless,” below – but don’t wait about too long, because those tickets aren’t going to!