When the saints come marching in, St. Paul and The Broken Bones will be leading the pack. The eight-piece funk-soul band from Birmingham, Alabama will have announced a 2022 Spring Tour of the U.S. in support of their forthcoming "The Alien Coast" studio album. As part of this nationwide tour, the band will come marching in to the Stage AE on Wednesday 16th March 2022. Fans are making frenzied moves to score tickets to St. Paul and The Broken Bones highly energized shows. Well, no need to break bones in getting one as tickets are available with a few easy clicks starting with that 'Get Tickets' sign on this site. What are you waiting for? Book your tickets now! 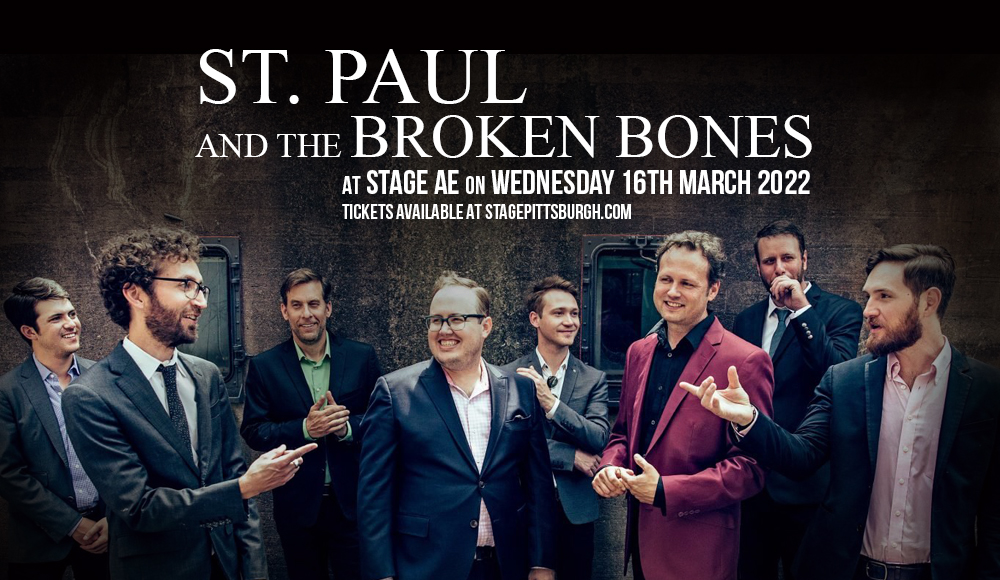 In 2012, St. Paul and The Broken Bones officially got together as a solid eight-piece soul band based in Birmingham, Alabama. Founders Paul Janeway and Jesse Phillips had known and worked together since the mid-2000s, then went on their separate ways. Fate and a supposed one-time-only project brought them together again but found that they clicked and decided to stick and form a soul-infused band. From their recruits, St. Paul and The Broken Bones is now an octet ensemble composed of Paul Janeway (vocals), Browan Lollar (guitar), Jesse Phillips (bass), Kevin Leon (drums), Al Gamble (keys), Allen Branstetter (trumpet), Amari Ansari (saxophone), and Chad Fisher (trombone).

To date, St. Paul and The Broken Bones have released three studio albums and two EPS, each debuting in the Billboard 200 list. Their legendary NPR Tiny Desk performance also has garnered over 7 million views. St. Paul and The Broken Bones are reputed to be a music powerhouse on the live stage delivering a “potent live show that knocks audiences on their ass”, as described by Esquire. Known for their ever-evolving musical explorations, expect the unexpected, and just get blown away with their explosive sonic dreamscapes to take you to an 'alien coast'.