Attention all metalcore fans! Your dream line-up is coming to Stage AE on Wednesday 20th May 2020, as Sleeping With Sirens and The Amity Affliction bring their epic co-headlining tour to the stage! Sleeping With Sirens have been busy this year with the Medicine Tour that saw them hitting the road with Set It Off, Belmont, and Point North in support of their 2019 album How It Feels To Be Lost, and Amity Affliction are in the throes of promoting their hot new album Everyone Loves You…Once You Leave Them! Adding to the already stacked line-up will be special guest support acts Stray From The Path and UnityTX! 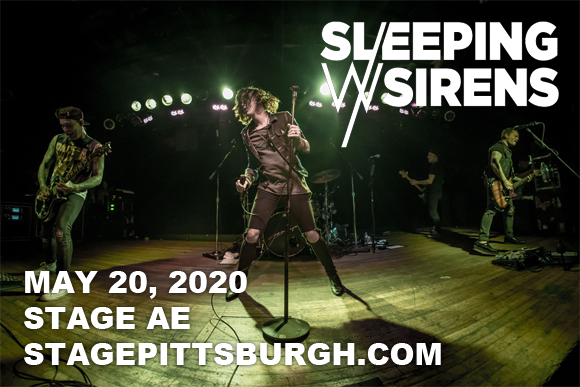 Michegan-based post-hardcore band Sleeping With Sirens began in Orlando, Florida in 2009, with members of For All We Know and Paddock Park coming together to create a new act. The band's 2010 single "If I'm James Dean, You're Audrey Hepburn" , the lead single from their debut album With Ears to See and Eyes to Hear, brought them critical acclaim and led to the album debuting at number seven on the Billboard 200. Their mainstream breakout came with their second album, propelled by the single "If You Can't Hang". Their 2013 album, Feel, did similarly well, debuting at number three on the Billboard 200. To date, the group has released six studio albums, their most recent being 2019's How It Feels To Be Lost, which launched the singles "Leave It All Behind", "Break Me Down" and "Agree to Disagree".