Former Disney star Sabrina Carpenter comes to Stage AE on Saturday 27th October 2018 on her Singular Tour! Promoting the release of her upcoming third studio album, which sees the singer evolve both lyrically and musically, taking a new dance-oriented direction, she will be performing a host of brand new material! Don't miss your chance to see this talented performer live! 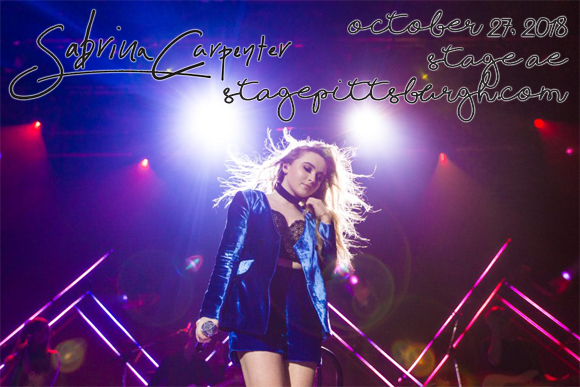 American actress, singer, and songwriter Sabrina Carpenter first came to public attention as an actress, in her role as Young Chloe in Fox's TV series The Goodwin Games, and later as Maya Hart in the Disney Channel series Girl Meets World. In March 2014, Carpenter released her debut single "Can't Blame a Girl for Trying", which served as the title track for her debut EP, which was released the following month. Carpenter's debut album, Eyes Wide Open, was released in 2015, and later that year she won the  Radio Disney Music Award for Best Crush Song with her single "Can't Blame a Girl For Trying". Her second studio album, Evolution, was released in 2016, and her third studio album, Singular, is slated for a November 2018 release.