Are you ready for Red Sun Rising?? The latest rock phenomenon are on tour with their epic sophomore album, “Thread.” They’re on their way to the Stage AE on Wednesday 7th November 2018. Tickets are expected to sell out FAST so don’t miss out – get yours NOW while they last!! 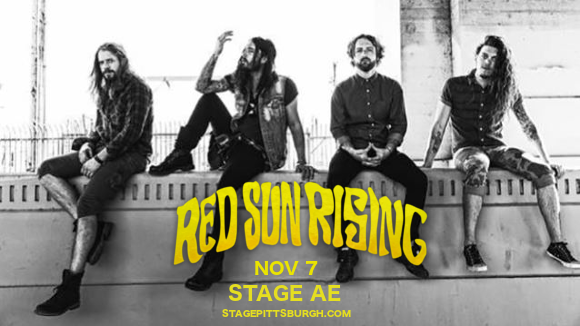 Formed in 2006, Red Sun Rising are one of the most sonically diverse bands to surface in the last decade. Currently comprised of Mike Protich, Ryan Williams, Dave McGarry, Ricky Miller, and Pat Gerasia, Red Sun Rising saw their singles "The Otherside" and "Emotionless" reach number 1 on the Mainstream Rock chart, making them only the second band to have two songs hit the number one spot from the same album.

After the success of their debut major studio release (Polyester Zeal), all eyes were on Red Sun Rising to see what they’d come up with for their second “Everybody had ideas, but we hadn’t actually turned them into full songs yet,” the band said in an interview, reflecting on the writing process. “So we got a cabin and lived there for two weeks and we just jammed on these songs. That was very challenging. When you have five guys in a room all throwing out ideas, it’s pretty counter-intuitive to being creative. But once everyone figured out what their strength was, by the time we got into the studio the recording process was a breeze.”

“Thread,” has been loved by audiences and acclaimed by critics. Grab a copy for yourself if you haven’t yet – and then book your tickets to see the band live, as you’re sure to want to!!