Funk-rock weirdos Primus will be joined by fellow funky rockers Clutch for a night of stoner-friendly, badass grooves! Heading to Stage AE on Sunday 30th July 2017, the bands will each be playing a full set, and who knows, with nothing new from Primus since 2014, there's a chance they may have something special in store! 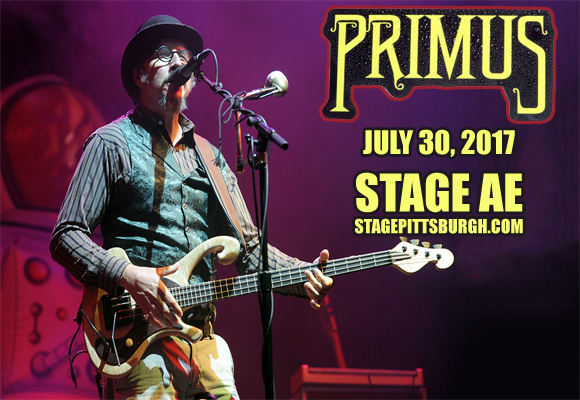 "[Primus is] quite possibly the strangest top-10 band ever, and good for them."

Hailing from El Sobrante, California, quirky funkmeisters Primus have been making music since 1984. Currently composed of bassist/vocalist Les Claypool, guitarist Larry "Ler" LaLonde (both formerly of thrash metal band Blind Illusion) and drummer Tim "Herb" Alexander, the band has released eight musically diverse albums to date, several on Claypool's own label, Prawn Song Records. Known for their amusing catchphrase “Primus Sucks!”, the band are also notable for recording the original theme for the TV show South Park. Their most recent release, 2014's Primus & the Chocolate Factory with the Fungi Ensemble, is a re-imagining of the  soundtrack to the 1971 film Willy Wonka & the Chocolate Factory.