Kawaii synth-pop sensation Poppy comes to Stage AE on Saturday 9th February 2019 on her Am I a Girl Tour! The tour sees Poppy supporting the release of her sophomore album of the same name, bringing her unique and energetic live show on the road with a set of brand new material! The YouTube sensation is an arresting and captivating live performer, and a must-see for fans of quirky alt-pop! 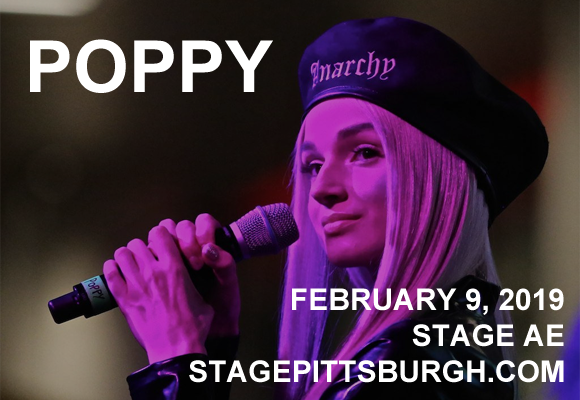 Singer, songwriter, actress, dancer and YouTube star Poppy began her career in 2012 as a cover artist, posting performances on social media. In 2015, she signed with Island Records, releasing her debut single, "Everybody Wants to Be Poppy", in June of that year. Bubblebath, her debut EP, was released on the label in 2016. In October of 2016, she released an experimental ambient music album called 3:36 (Music to Sleep To). Poppy's debut album, Poppy Computer, was released in October 2017 on Mad Decent. Her second studio album, Am I a Girl?, was a joint release through her own record label I'm Poppy and Mad Decent in October 2018.