HUGE news, Nothing More fans!! The Texan hard rockers have announced a 2019 tour with an incredible lineup including Of Mice & Men, Badflower and Palisades!! They’re on their way to the Stage AE on Thursday 7th March 2019 – don’t miss it!! Tickets on sale now and expected to disappear fast, so don’t delay – grab yours fast while you have the chance!! 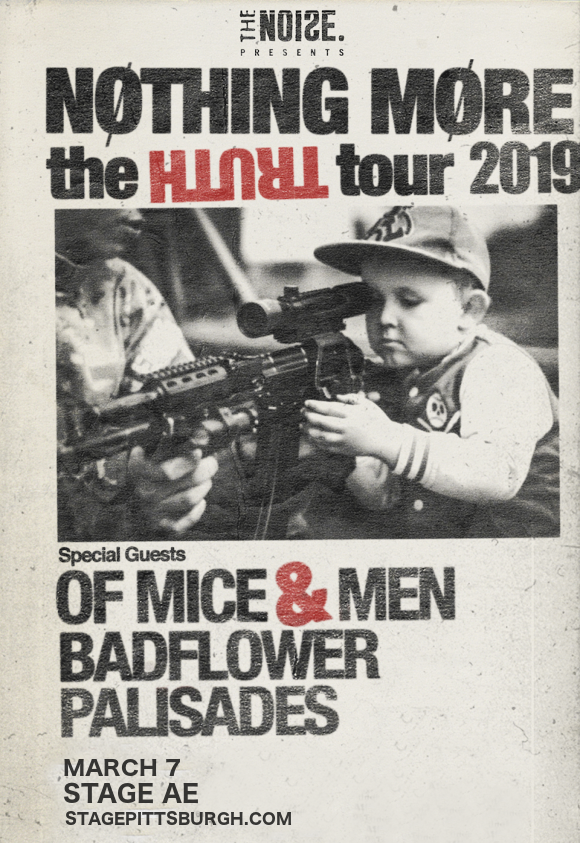 Formed in 2003 and struggling with a changing lineup to catch the attention of a record label, Nothing More’s persistence paid off with their self-titled album “Nothing More,” which caused  Eleven Seven Music to sign the band on the spot, releasing the album in 2014 to give the band their big commercial break. The singles "This is the Time (Ballast)”, "Mr. MTV", Jenny", and "Here's to the Heartache" all hit the top 15 of the Mediabase Active Rock chart and Billboard Mainstream Rock chart, with the first charting at the top of the former.

Now, the band have gathered a huge fanbase worldwide, and they’re about to prove it with The Truth tour. “Concerts are perfect environments to stimulate the revelation of a truth, an ‘Ah-HA!’ moment, because we are all sharing the energy of the music and the moments of community and inspiration, moments that can affect a positive change,” Jonny Hawkins said, when asked about the upcoming tour name. “It’s not about any one political movement or cause, it’s about everybody searching for the truth in all things, and putting that new awareness into action.”

Get ready to experience that truth for yourself – book your tickets to see Nothing More NOW while they last!!