Symphonic metal fans, get ready for the biggest upcoming tour of 2018 – Nightwish, with Floor Janson!! These Finnish giants of the genre are back and ready to give fans the most epic heavy metal experience of their lives – coming to the Stage AE on March 25th, 2017! Don’t delay!! Get your tickets to this sell-out show NOW while they last! 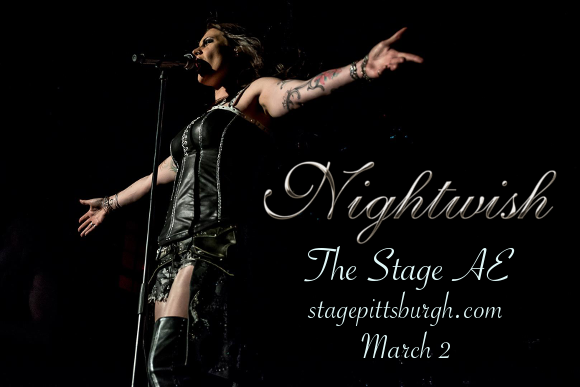 Formed in 1996 in Kitee, Finland by Tuomas Holopainen, Emppu Vuorinen, Jukka Nevalainen, Marco Hietala, Sami Venska, and Tarja Turunen, Nightwish gained instand popularity in Finland with their album “Angels Fall First” in 1997. Their second, “Oceanborn,” in 1998, started to gain them popularity in other countries including the United States, while their third and fourth albums, “Wishborn,” in 2000 and “Century Child,” in 2002, cemented their status in the symphonic metal genre. Their fifth album, “Once,” broke into the mainstream, selling more than a million copies, with the smash hit single “Wish I Had An Angel,” being featured on soundtracks for no less than 3 major films and receiving major airplay on MTV.

After the departure of lead singer Tarja Turunen in 2005, Nightwish recruited Anette Olzon, and released their most successful album yet, “Dark Passion Play”. In 2012, Olzon was replaced by Floor Janson whilst on tour – thanks to Janson’s outstanding performance, she has remained a permanent member of the band ever since.

Don’t miss your chance to see the greatest incarnation yet of the biggest Finnish band in the world – book your tickets to see Nightwish live today!!