For some, it's the most wonderful time of the year, but LA trap DJ and producer Nghtmre is getting kinda spooky with his Nghtmre Before Xmas Tour, coming to Stage AE on Friday 30th November 2018! What would the holidays be without some hard-hitting bass in your face, eh? Taking to the decks to create a winter wonderland of incredible beats and scary-good drops, this rising star knows how to get a dancefloor pumping, so get ready to stomp those EDM-loving feet all night long! 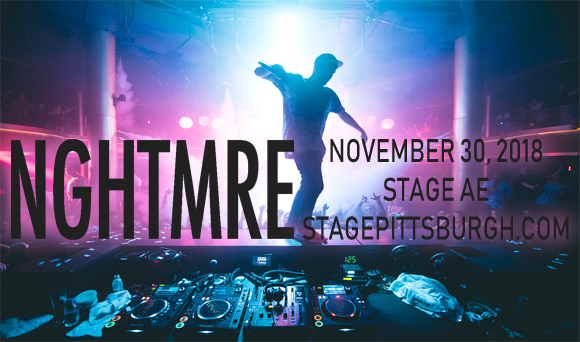 Nghtmre (aka American DJ and electronic music producer Tyler Marenyi), began his music career in 2014, coming to prominence with trap and house remixes of songs by Tiësto, Rae Sremmurd, and Skrillex, before starting to write his own songs and collaborating with other producers. Signed to Diplo's record label, Mad Decent, he released his debut EP, Nuclear Bonds (a collaboration with fellow producer Slander), in 2015. His debut solo EP, titled NGHTMRE EP, was released the following year and peaked at number 17 on the US Billboard Top Dance/Electronic Albums chart. "Need You", a collaborative single with producer Dillon Frances, was released in 2016 and peaked at number 21 on the US Dance chart, as did his 2018 single with The Chainsmokers, "Save Yourself". Another collaboration – an EP with New Orleans rapper Pell, titled Magic Hour – was released in June 2018.