Trap and house fans get ready: Steez Promo Presents MEGA Pittsburgh, a co-headlining show with Snails and Nghtmre with support from Funtcase and Boogie T!! Coming to the Stage AE LIVE on Thursday 14th December 2017 – don’t miss out! Tickets in high demand and selling fast – get yours NOW to be sure of your place!! 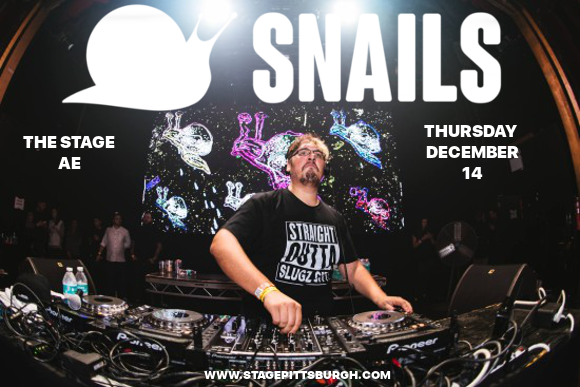 Pronounced “Nightmare,” Nghtmre is the stage name of DJ Tyler Marenyi. Kicking off his career with remixes of artists including Rae Sremmurd, Tiësto, and Skrillex, he began to really get noticed when Skrillex played one of his songs at Ultra Music Festival. In 2016, he released his first EP on the Mad Decent record label, which raced into the Billboard's Top Dance/Electronic Albums chart!

Snails, AKA Frédérik Durand, first appeared on the scene in 2012, releasing songs on Kannibalen Records, a Canadian record label. Collaborating with Flux Pavilion and Jack Ü, and also gaining attention with a little help from Skrillex, Durand went on to perform at festivals across the US, releasing music across multiple labels. In 2016, Snails was ready to take on the world, playing festivals not only across the US but throughout Asia as well. In October 2017, he even held his own “Slugtopia,” festival at the iconic red rocks venue!

Get ready to catch Snails’ unique “Vomitstep,” signature live along with the amazing sounds from Nghtmre, Funtcase, and Boogie T! What are you waiting for?? Get your tickets today!!