Fresh from touring with superstar hip hop artists Logic and Kyle, NF comes to Stage AE on Wednesday 3rd October 2018 on his headlining Perception Tour! The platinum-selling performer is touring in support of his number-one album of the same name, bringing fresh new material to the stage, as well as smash hits like "Why" and "Let your Down"! Book your tickets now to see one of the hottest new stars in hip hop live! 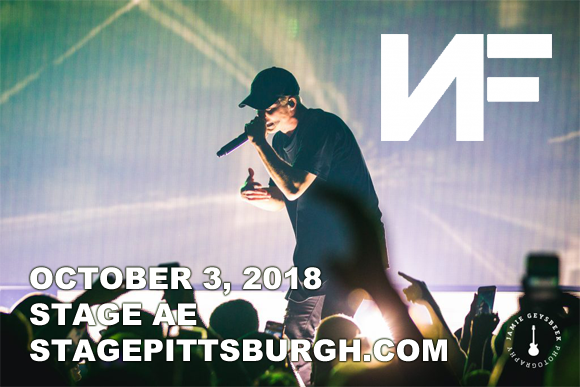 NF is the stage name of American Christian hip hop artist Nate Feuerstein. First coming to public attention in 2014 with the release of his self-titled EP, Feuerstein found his breakthrough on the Billboard Christian Albums chart, where it peaked at number twelve. Mansion, his debut album, was released by Capitol CMG in 2015. His 2016 follow-up, Therapy Session, won the 2016 Dove Award for Best Rap/Hip Hop Album of the Year and was followed by Perception in 2017, which debuted at number one on the Billboard 200 and launched the single  "Let You Down", which charted internationally and went triple platinum.