The Welsh pop punk rockers Neck Deep have announced that they will be heading back out on the road for 2021, taking to the stages across North America to bring their US fans an explosive concert experience! Neck Deep will be coming LIVE to Stage AE on Thursday 2nd December 2021 and tickets are now officially on sale – be sure to secure your place in the crowd! 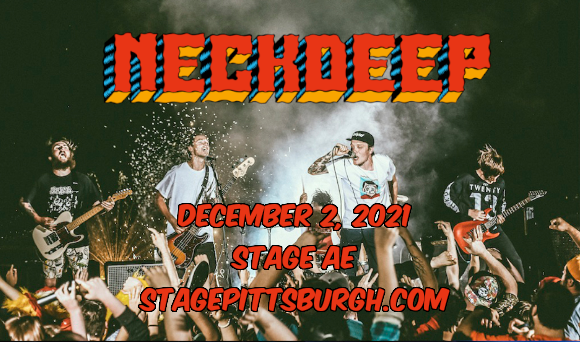 The incredible Neck Deep are a band that are full of energy and powerful performances!

With their pop punk soundscape they have developed on their fan following, first hailing from their home country of Wales to becoming an international name, with masses of global appeal. With their first initial single, What Did You Expect? They hit the ball rolling and transformed their career, just by posting their song online. Neck Deep received a wide spread following and gained them the chance to record and release records to their newly founded fan base.

Neck Deep kick started it all with their first EP's as they released them one year after the other, first with Rain in July back in 2012 and A History of Bad Decisions which they dropped in 2013. With their quick turnaround across the mainstream scene, Neck Deep signed to US label, We Are Triumphant and were able to continue spreading their music further afield.

With their new material out into the world, "People took notice and demanded we play shows" the band said and with a full UK tour lined up supporting Punches and Me Vs Hero, Neck Deep were able to bring the concerts that people were after. With plenty of excitement surrounding them, Neck Deep were selling out venues around the world and continued to bring their music to more countries, including their live shows in Florida.

Neck Deep became such a popular band that their members had no choice than to follow their dream and make the music their full time focus and during the next few years, Neck Deep were back with follow up albums, Life's Not out to Get You which they released in 2015 and then The Peace and the Panic in 2017.

Their success continued into 2019 as they brought out their new single 'She's a God' and spent last summer touring along side Blink-182 and Lil Wayne. With their new album on the horizon titled – All Distortions Are Intentional, Neck Deep are back on the road on their US tour in support of their studio release.

Come and catch the exciting band as they bring their own headline dates to the US this Fall/Winter!