Having spent the majority of the summer on the road with Vans Warped Tour, Mayday Parade are back with their headlining Welcome to Sunnyland Tour, coming to Stage AE on Tuesday 6th November 2018! The alt-rockers have embarked on the stint to promote their sixth studio album, Sunnyland, and will be delivering exciting new material, as well as some of their most popular tunes! They'll be joined by Californian acoustic rock duo This Wild Life and rock singer-songwriter and former Yellowcard frontman Willam Ryan Key in support! 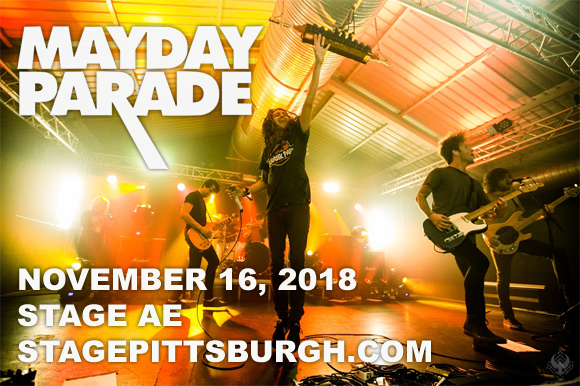 Hailing from Tallahassee, Florida, American rock band Mayday Parade made their debut in 2006 with the independently released EP Tales Told by Dead Friends – an instant hit, which sold over 50,000 copies without any label support. That year, they signed to Fearless, releasing their debut album, A Lesson in Romantics, with the label in 2007. After the departure of vocalist/guitarist Jason Lancaster, the band had a change in personnel, and in 2009 they signed a major-label contract with Atlantic. They major-label debut, Anywhere But Here, was released in October of that year. The band's third, self-titled studio album was released in 2011 and peaked at number 12 on the Billboard 200, followed by Monsters in the Closet (2013), which peaked at number 10. To date, the band has released six studio albums – their most recent, Sunnyland, was released on Rise Records on June 18, 2018.