One Direction's Louis Tomlinson comes to Stage AE on Monday 14th February 2022 on his first solo tour! The singer and songwriter has an exciting year ahead of him with the release of his hotly-anticipated debut album, which contains the singles "Two of Us", "Kill My Mind" and "We Made It"! Fans can expect to hear several new tracks from the heartthrob, plus some of his previous hits and a few surprises in the mix as well! 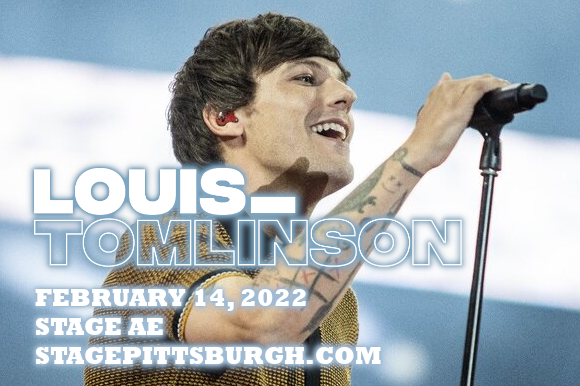 English singer, songwriter and television personality Louis Tomlinson first came to fame as part of boy band One Direction. One Direction was formed after Tomlinson had auditioned as a solo contestant on the British music competition series The X Factor and was subsequently put into a band with four fellow contestants. Although the band did not win the competition, they signed to SyCo, Simon Cowell's label, in 2011 and released five albums together, embarking on four world tours and winning nearly 200 awards. Tomlinson was the band's most prominent songwriter, with credits on 38 of One Direction's songs, including six of their hit singles. Since the disbanding of One Direction, Tomlinson has released several solo singles, including "Just Hold On" (with Steve Aoki), which peaked at number 2 on the UK Singles Chart and reached number one on the Billboard Dance/Electronic Digital Song Sales chart. His debut solo album, Walls, is due for release in 2020 and is preceded by the singles "Two of Us", "Kill My Mind" and "We Made It".