The wonderful live band – Local Natives are coming to bring their energetic and poetic music to Stage AE LIVE on Saturday 18th March 2017!

Full of gorgeous melodies, catchy harmonies and heartfelt lyrical messages is the Local Natives. Catch them as they take to the road for Spring 2017 and blow you away in concert.

"The Local Natives’ widespread appeal was clear just in the concert attendees, who ranged in age from early teens to late middle age and made up a variety of races and sexes. The show was most definitely a crowd pleaser and entertaining." 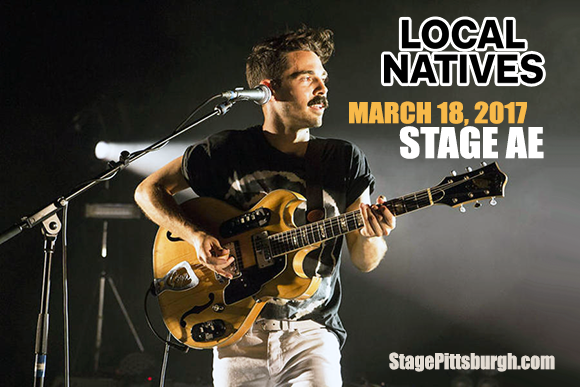 Local Natives are an electronic inspired Indie Rock band that first formed in Southern California, Unites States. Their incredible music has spanned across the world and has become a hit in the UK as well as the US and therefore has crafted them a dedicated fan base and a consistent schedule of exciting tour dates! Their sound appeals to the masses as it hints influence from Folk as well as Pop and their lyrics talk many subjects, politically and personally.