When two stalwarts of the nineties alternative music scene join forces, brace yourselves rock fans for an ALT-IMATE hits-packed tour! Seminal alt-rock bands BUSH and +LIVE+ are on a double-headliner tour cover 34 cities across the country. And yes, they'll hit the Stage AE with a bang on Sunday 25th August 2019. Joining in for the ride is fellow-rocker and Canadian band Our Lady Peace. Fans will truly experience a knockout show from not one, not two, but three amazing and iconic bands. Anticipate rabid rock fans who will stop at nothing just to get first dibs on those highly in-demand tickets. Lock those tickets in right here, right now! 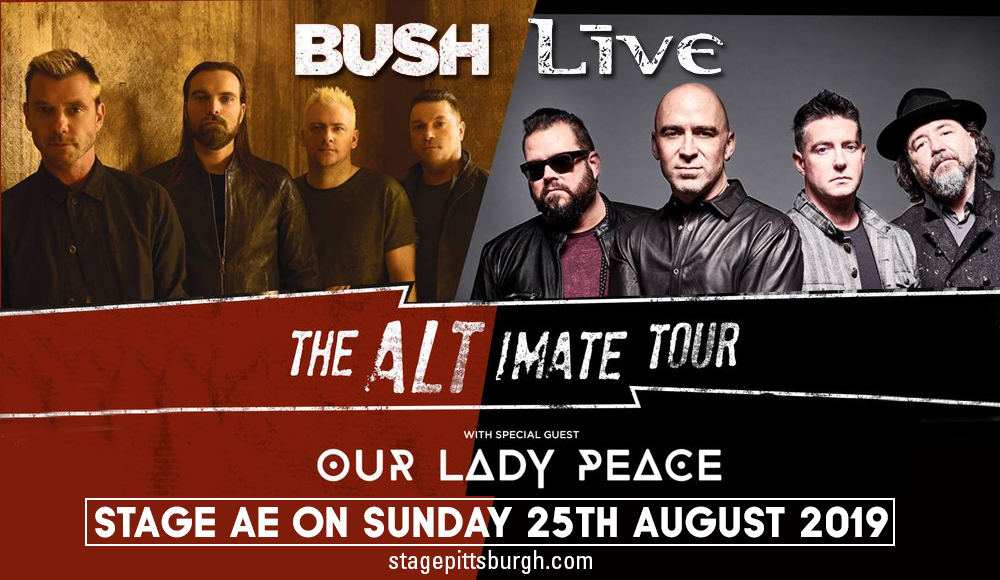 A double-headliner plus an equally incredible guest supporting act — what more could you ask for?! BUSH and +LIVE+ plus OUR LADY PEACE are celebrating triple 25 anniversaries this year, and yes, you, dear alt-rock fans are in for a triple treat of music from three landmark albums that defined the 90s alternative rock sound. Bush's "Sixteen Stone" and Live's "Throwing Copper", plus Our Lady Peace's "Naveed" — is your ultimate chance to hear the colossal hits from these albums all in one smashing ALT-IMATE tour!

If fans are buzzing non-stop with excitement and eager anticipation, these bands are equally thrilled to push the pedal to the metal and get the show on the road.

“We are thrilled to be touring this summer with LIVE,” says BUSH frontman Gavin Rossdale. “The wealth and depth of songs from both bands should provide a great night of music. Looking forward to seeing you all this summer.”

“Bush is a great band and Gavin is a super passionate singer and performer. I’m really looking forward to spending the summer with them,” said +LIVE+ frontman Ed Kowalczyk. “I know the fans are going to get one hell of a show.”

As all albums were released in 1994, they all lorded over the airwaves with monster hits such as: “Lightning Crashes,” “Selling The Drama,” "I Alone" by Live; while Bush strongly impacted the soundscape with “Glycerine,” “Comedown” and “Machinehead.” On the other side of the continent, Our Lady Peace was brewing a hot pot of hits that spilled over to the rest of the world, which include: "Superman's Dead", "Somewhere Out There", "Clumsy", "4am", and many more.

“It's an amazing feeling to know that these songs still resonate so profoundly with people,” says Kowalczyk. “And I still totally get off on celebrating this music with them. With Throwing Copper, we were taking on big things with a big sound. Love, truth, birth, death, philosophy, religion, spirituality…we were asking the perennial questions and poking around for answers with this massive and dynamic sound. It attracted people from all over the world. We were inviting them to imagine that rock and roll could be a valid forum for exploring these types of things…we built it and they came.”

“Sixteen Stone propelled us onto the musical landscape,” says Rossdale. “Those songs have found a way into the soundtrack of people’s lives and that is the highest compliment available. We’ve continued to make music that resonates with people.”

Don't let this great rock show slip right off your fingers. Get a grip by clicking the 'buy tickets' button now!