King of Teens and hip hop sensation Lil Yachty comes to Stage AE on Sunday 28th October 2018 on The Disrespect Tour! Yachty, who recently teamed up with Donny Osmond on the Chef Boyardee jingle “Start the Par-dee” in a very unexpected musical turn of events, is touring in promotion of his mixtape Lil Boat 2. The "Who Want The Smoke" rapper will be performing tracks from the hot new release, and will be joined for the night by "Gucci Flip Flops" collaborator and “Cash Me Outside” rapper Bhad Bhabie as his opening act! Don't miss your chance to see these two lit acts live – tickets available now! 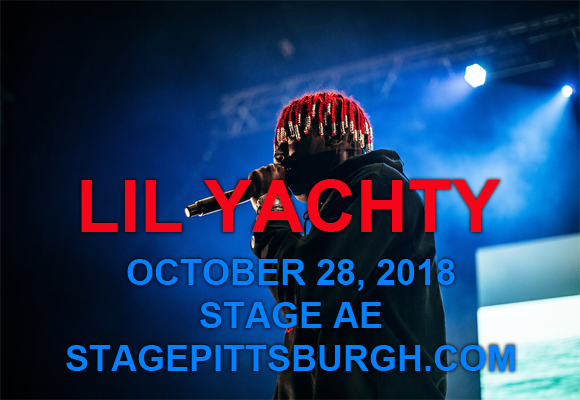 Lil Yachty is an American rapper and singer whose career first took off in 2015 when his SoundCloud track, "One Night", was used in a comedy video that went viral. As well as "One Night", another track from his debut EP Summer Songs, "Minnesota", became popular, gaining gold certification. A debut commercial mixtape, Lil Boat, followed in 2016. In April of that year, Yachty collaborated with DRAM on the hit single "Broccoli", which peaked at number 5 on the Billboard Hot 100, and one month later he featured on Chance the Rapper's Coloring Book mixtape. His debut studio album, Teenage Emotions, was released on May 26, 2017, by Quality Control Music, Capitol Records and Motown, debuting at number five on the Billboard 200. His second and most recent studio mixtape, Lil Boat 2, was released in March 2018 and debuted at number two on the Billboard 200.