Country music group Lanco are hot property right now and, fresh from supporting Dierks Bentley on his The Mountain Tour, they are coming to Stage AE on Thursday 1st November 2018 for a headline show! Their first major headlining tour sees the group promoting their sensational debut album Hallelujah Nights, and with support from Travis Denning, it looks to be one of the country events of the year:

“This is a brand new show we’ve put together for our fans, and it will be first time we get to play Hallelujah Nights in its entirety,” Lancaster says. “This year has been full of so many incredible firsts for us, and we’ve learned so much out on the road about ourselves and about what our people want and expect from us.” 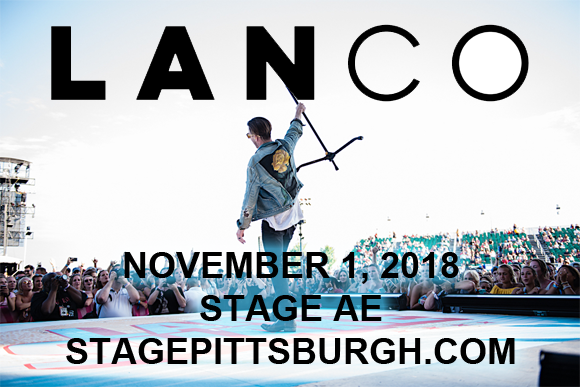 American country music band Lanco (short for Lancaster and Company) was founded in 2015 and consists of Brandon Lancaster (lead vocals), Chandler Baldwin (bass guitar), Jared Hampton (keyboards), Tripp Howell (drums), and Eric Steedly (guitar). After a chance meeting with American record producer, songwriter and session musician Jay Joyce at a Keith Urban concert, the band signed a publishing deal with his production company, which in turn led to a record deal with Arista Nashville. Their debut four-song EP, Extended Play, was released in April the following year. In 2017, the band's second single, "Greatest Love Story", appeared in the Netflix series The Ranch, and by the end of the year had reached number one on the Billboard Hot Country Songs and Country Airplay charts. The group's debut album, Hallelujah Nights, was released in January 2018 and debuted at number one on Billboard's Top Country Albums, with 13,000 copies (19,000 album equivalent units) sold in the first week. It also peaked at number 20 on the Billboard 200.