In This Moment Tickets

Back on the road, and bigger than ever, female-fronted metallers In This Moment will be bringing their terrifying, sexy, theatrical show to Stage AE on Tuesday 25th April 2017, for a night that you will never forget! Not only will the band be bringing you an explosion of powerful riffs, mighty vocals and creepy-cool stage shenanigans, they'll also be bringing with them special guests Motionless in White, Avatar and Gemini Syndrome!!! 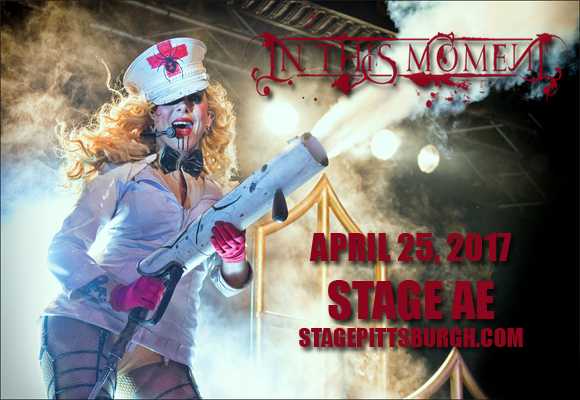 In This Moment are an American metal band, formed in 2005 by  singer Maria Brink and guitarist Chris Howorth, and originally known as Dying Star. Following a change in musical direction, the band recruited and drummer and bassist, and changed their name. Two years later, they released their debut album, Beautiful Tragedy, on Century Media Records. The band's second album, The Dream, marked their first time charting on the Billboard 200. To date, In This Moment have released five studio albums, and have found popularity on the festival and touring circuit, appearing at: Ozzfest in 2007 and 2008, Warped Tour in 2009, Download Festival in 2009 and 2013, Mayhem Festival in 2010, Music as a Weapon V tour in 2011, the Uproar Festival in 2012, Rock on the Range in 2012, 2013, and 2015, the Carnival of Madness tour in 2013, Knotfest in 2014, Rockfest in 2015 and Rocklahoma in 2015.