Minnesota indie rock band Hippo Campus have been making waves in the music scene for a few years now and with a new release, Bambi, on the way, the group are going from strength to strength! Headed to Stage AE on Monday 22nd October 2018, the five-piece match catchy, danceable tunes with honest, introspective lyrics that draw from the current world climate and aren't afraid to explore the deeper human emotions:

"The only thing I'm sure about with this album is how unsure it is," he says. "I want people to feel as confused as we are about everything, because confusion can be an interesting thing. When you don't totally understand what's going on, you never stop thinking and questioning and trying to figure things out for yourself. I think a lot of good can come from that." 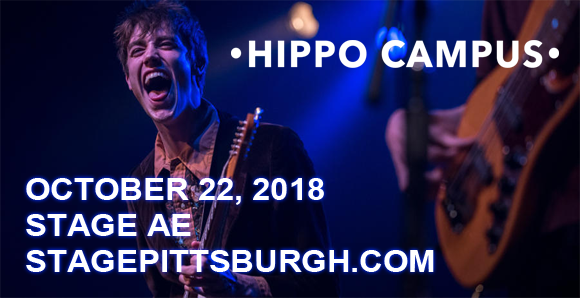 Indie rock band Hippo Campus formed in St. Paul, Minnesota in 2013 when Jake Luppen (vocals/guitar), Nathan Stocker (guitar/vocals), Zach Sutton (bass) and Whistler Allen (drums/vocals) met at their high school, the Saint Paul Conservatory for Performing Artists. The group released its first independent EP, Bashful Creatures, in November 2014. The album was re-released the following February after they signed with Grand Jury Records, leading to airplay for the singles "Little Grace" and "Suicide Saturday". Their second EP, South, was released in October 2015 and debuted at number 15 on the Heatseekers Chart. Their debut album, Landmark, was released on February 24, 2017, and their follow-up, Bambi, is slated for a September 2018 release.