Listen up classic rock fans, the latest modern revival act is on tour!! That’s right, it’s the incredible Greta Van Fleet, bringing their hard-hitting live show to the Stage AE on Wednesday 18th July 2018 at the Stage AE!! Tickets are flying fast – get yours NOW while you still can!! 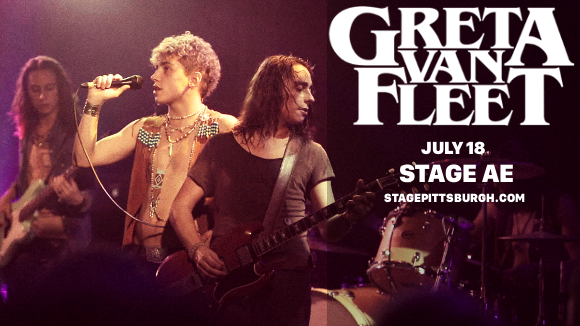 Formed in 2012 by brothers Josh, Jake and Sam Kiszka, and drummer Danny Wagner. For the brothers, their obsession with music started early. The band’s guitarist, Jake, has been playing since the tender age of 3. “Our father played guitar, and that’s what I wanted to do,” he says. “I wanted to play like him. Then I started listening to all the records our parents had laying around, listening to the guitars on those tracks and trying to do that with the acoustic.”

Their hard work has paid off. Winning the official seal of approval from their idol, singer Robert Plant, the heavily Led Zeppelin-inspired act have shot to massive popularity, first in their hometown of Frankenmuth, Michigan, and quickly gaining the attention of the global classic rock scene. Leading the revival of the 70s hard rock sound, the band are on tour now with their latest EP, “From the Fires”.

Get ready to hear all their latest material live – it’s going to be an epic rock show!! Get your tickets to see Greta Van Fleet NOW while they last!!