Prepare yourself for one of the best and freshest acts of the last decade at the Stage AE!! British psychedelic indie-pop band Glass Animals will pay a visit to Pittsburgh on Monday 31st July. In support are the wondrous Swedish trip-hop group Little Dragon. Don’t miss out on this uniquely strange and special evening – buy your tickets now. 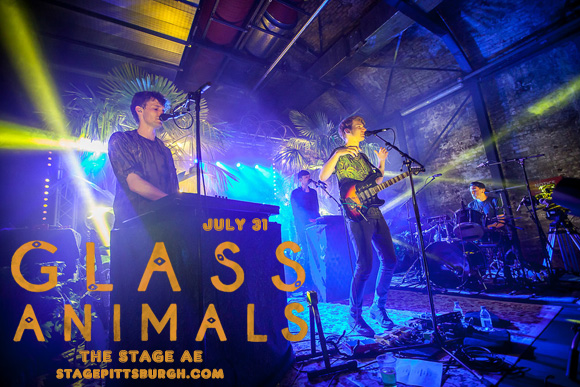 Formed in 2012 in Oxford, on the Wolf Tone label owned by producer Paul Epsworth, the Glass Animals released their debut album “ZABA” in June 2014 to enormous critical acclaim. The album is fresh and unique, featuring a “jungle” sound in keeping with the album’s title (taken from the children’s book “The Zabajaba Jungle”) featuring tropical tuned percussion and sound effects such as the sounds of children playing and animals crying – the mix of non-musical sounds mixing with breathy, evocative lyrics and lush, synth-driven arrangements producing a heady soundscape. Their newest release; “How To Be A Human Being,” is harder-hitting, with poppier rhythms and beats and more energy overall – providing everything you need to be entertained at a live show!

Little Dragon were formed in 1996 Gothenburg, when young Yukimi Nagano, in her first year at high school, started to put music together with seniors Fredrik Wallin and Erik Bodin. The name came from the furious fits of rage Nagano apparently used to have in studio – a name she admits was “a little exaggerated but has some truth to it.” The wild nature of their lead singer must have done them some favours though – it wasn’t long before the band were touring Europe and making videos, their single “Twice,” directed by the award-winning Johannes Nyholm.
Don’t pass up the experience – grab tickets for these perfectly quirky and beautifully strange acts NOW!