Eclectic electric eccentric artist Girl Talk is bringing his 10th Anniversary Tour to Stage AE on Saturday 30th April 2022 (Rescheduled from Saturday 1st May 2021) for a very special hometown show! The Pittsburgh native is a local legend and was the first act to ever play at Stage AE, so when he returns to the place where it all kicked off to celebrate a decade of mash-ups and glitchy, experimental, dancefloor-filling hip hop, you know he's gonna bring one hell of a party! Expect the unexpected from this laptop wizard, who always brings a dose of humor when he drops that bass! 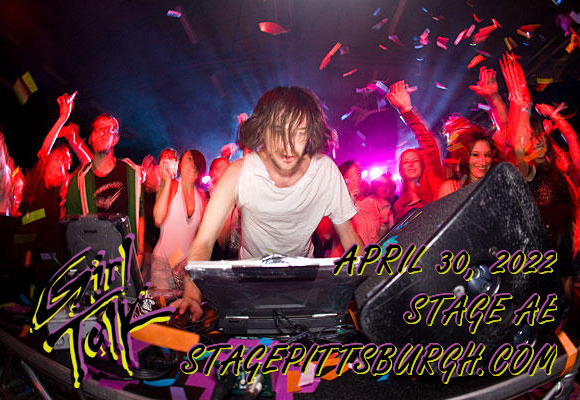 Girl Talk (aka Gregg Gillis) is an experimental glitch and mash-up DJ who began recording and performing in 2001. An independent artist who lives to challenge the status quo, Gillis has made his career from his chaotic, hip-hop influenced remixes of songs that often use dozens of unauthorized samples in quick succession, creating something entirely new. This approach has often courted controversy; something the DJ has embraced, calling his website Illegal Art. Even Gillis' stage name was chosen to upend convention:

"The whole point of choosing the name early on was basically to just stir things up a little within the small scene I was operating from. I came from a more experimental background and there were some very overly serious, borderline academic type electronic musicians. I wanted to pick a name that they would be embarrassed to play with. You know Girl Talk sounded exactly the opposite of a man playing a laptop, so that's what I chose."

Live, he's collaborated with a variety of artists, including Busta Rhymes, E-40, Juicy J and Freeway, and he's released singles with Waka Flocka Flame and Erick the Architect. His 2006 album Night Ripper appeared on several Best Albums of the Year lists, including Pitchfork, Rolling Stone and Spin, and his 2008 album Feed the Animals was number four on Time's Top 10 Albums of 2008, as well as receiving four stars from Rolling Stone, who ranked the album at number 24 on their Top 50 albums of 2008.