Austin native and multi-award-winning bluesman Gary Clark Jr. comes to Stage AE on Wednesday 10th November 2021 for a night of mind-blowing guitar playing and captivating groove! An eclectic and endlessly talented artist, Clark Jr. refuses to be pigeonholed by genre, so fans can be sure to expect a performance that ticks every musical box! Don't sleep on tickets for this chart-topping artist – they will sell out! 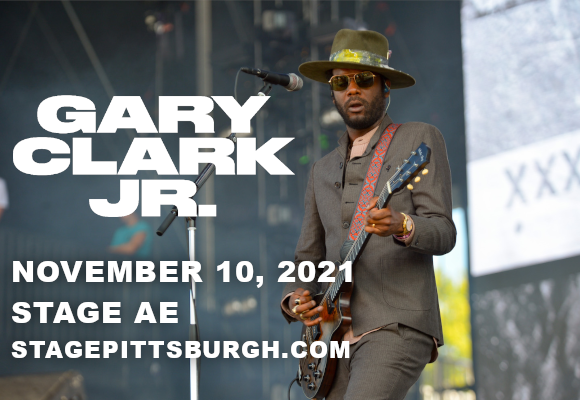 Hailing from Austin, Texas, Gary Clark Jr. is a singer, songwriter, and guitarist who grew up performing alongside legends like Jimmy and Stevie Ray Vaughn. 2011 saw him sign to Warner Brothers Records and release his debut EP, The Bright Lights, later that year. He has since released three studio albums – Blak and Blu (2012), The Story of Sonny Boy Slim (2015), and This Land (2019) – which all reached the Top 10 of the Billboard 200. A prolific live performer, he has shared the stage with a vast array of legendary musicians, including  Eric Clapton, Tom Petty and the Heartbreakers, B.B. King, and the Rolling Stones, and has released two live albums: Gary Clark Jr. Live (2014) and Gary Clark Jr Live/North America (2017). He has also featured as a guest artist on the albums of several well-known industry names, including Booker T. Jones, Talib Kweli, Foo Fighters, Tech N9ne, Childish Gambino, and Tom Morello, among others. In 2014, he took home a Grammy Award for Best Traditional R&B performance for the song "Please Come Home". This Land, his third and most recent studio album, won the  Grammy Award for Best Contemporary Blues Album in 2020, with the title track winning Best Rock Song and Best Rock Performance.