Brtish alt-rock singer, songwriter and multi-instrumentalist Eden comes to Stage AE on Saturday 16th May 2020 on the No Future Tour, in support of his brand new album that dropped on Valentine's Day! The performer has found success on both sides of the pond with his candid, melancholic dreamy songs that show an insight into his world… With each show, he creates an immersive experience for fans, using state-of-the art lighting, set design and instrumentation to curate a specifically tailored show that transports you to another time and space – a must for any fans of the rising star! 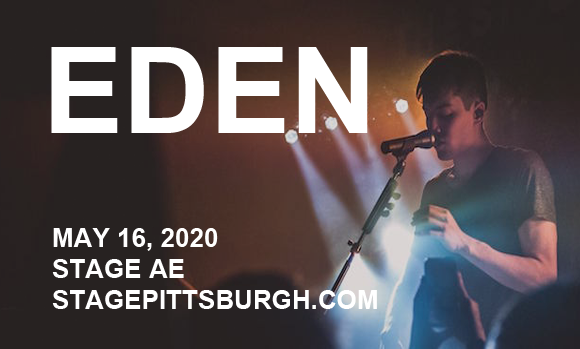 Irish singer, songwriter, multi-instrumentalist and record producer Eden, aka Jonathon Ng, began his career in 2013 under the name The Eden Project, independently releasing an album and three EPs under the moniker from 2013-2015. The Eden Project was a dance-oriented act, but after moderate success the multi-instrumentalist decided to change musical direction for something more rock-influenced. In August 2015, he released End Credits – his debut EP under the name Eden – followed by another EP, I Think You Think Too Much of Me, one year later. His debut studio album, Vertigo, was released in 2018 and hit the top 40 of the Billboard 200. He supported the album's release with an extensive world tour throughout the latter half of 2018. His second studio album, No Future, will be released in 2020.