Dustin Lynch comes to Stage AE on Friday 27th March 2020 as part of his Stay Country Tour in support of his fourth and newest studio album! The chart-topping, platinum-selling Tennessee singer-songwriter's latest LP is named after his childhood town, Tullahoma, and invokes the experiences he grew up with, so expect something intimate and heartfelt from this talented performer! Joining him on his 2020 tour will be newcomer Travis Denning! 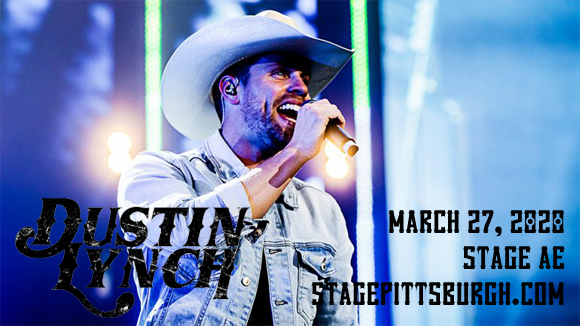 Tennessee native and country singer-songwriter Dustin Lynch found instant success with his Broken Bow Records-released, self-titled debut album, which came out in August 2012 and reached number one on the Top Country Albums chart. In 2014, Lynch continued his promising start with three consecutive number one singles on the Country Airplay chart from his second studio album, Where It's At: "Where It's At (Yep, Yep)", "Hell of a Night" and "Mind Reader". In 2018, having proven himself to be a country music star, Lynch was inducted into the Grand Ole Opry. His latest EP, Ridin' Roads, was released in spring 2019, and his next album, Tullahoma, will be released in 2020.