Responsible for dropping some of the sickest rap collabs of the past few years, Don Toliver has carved out a path for himself as a goddamn big deal. This fall, the Houston-based emcee comes to Stage AE on Thursday 30th September 2021 on his L.O.A.D. (Life of a Don) Tour, delivering tracks from his fire new album! Toliver is a lyrical master and a high-energy performer – there's no stopping this powerhouse! Catch him with support act Bia for a pumped up night of hip-hop! 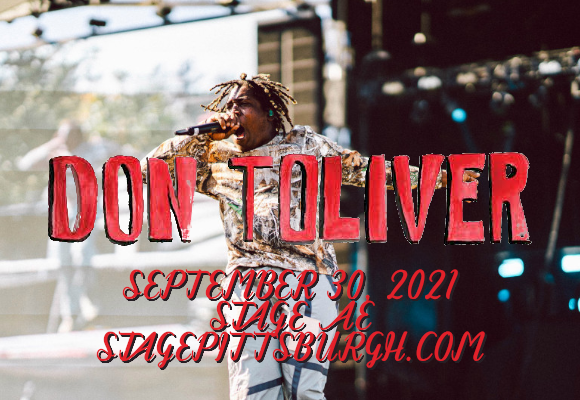 Taking the underground rap scene by storm in 2017 with Playa Familia – his collaborative mixtape with Yungjosh93 – Houston-based rapper, singer, and songwriter Don Toliver made his mark as one of the hottest new names around. Atlantic signed him the following year and he released hismajor label debut mixtape Donny Womack in August 2018. The next couple of years were spent putting his name to some fire collaborations with huge names, including Travis Scott, Wiz Khalifa, Quavo and Offset from Migos, and Eminem. Then came Heaven or Hell, his debut album, in 2020, released on Travis Scott’s imprint label Cactus Jack. It put him on the map, charting at number five on Billboard’s Top R&B/Hip-Hop Albums chart and number seven on the Billboard 200. The rest of 2020 and 2021 saw Toliver hit the charts with more features, including Internet Money’s track "Lemonade" with Gunna and Nav, which reached number six on the Billboard Hot 100.