It's official: Dillon Francis & Alison Wonderland are together. Indeed, they will be sharing the stage on double billing at the Stage AE on Saturday 23rd February 2019. Their chemistry is undeniable. Their sets are electric. Dillon Francis & Alison Wonderland are bound to set the stage and dance floor ablaze with their electrifying beats that turn the party mode on. As soon as the beat drops, everybody loses and goes into wild abandon. Hence, the tour entitled "Lost My Mind" fits to a Tee! The demand for tickets to this show is mind-blowing. If you want to explode on the dance floor, book your tickets now before this chance blows off in your face. Grab it now or lose it later! 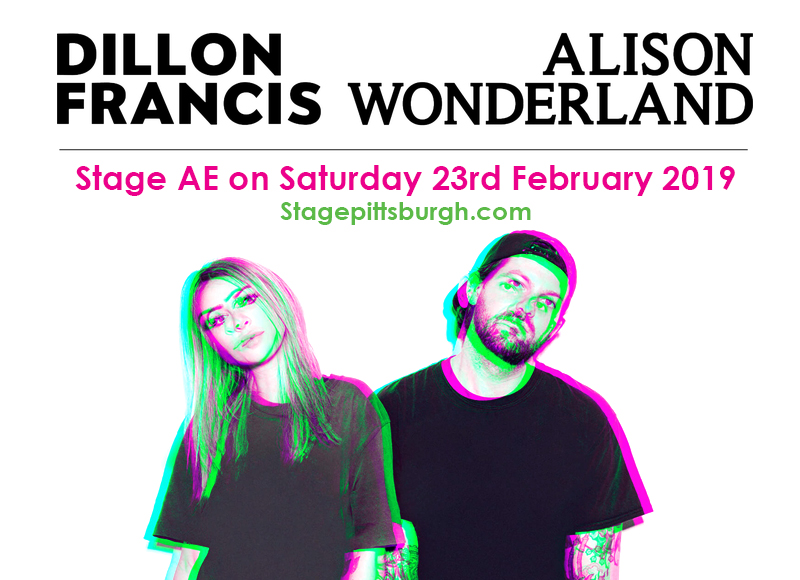 With massive followers on social media and numerous streams on Soundcloud, Dillon Francis & Alison Wonderland are not just your typical internet celebrity sensations. When they hit the stage and drop the beats, they cause an enormous sonic boom pulsating through galaxies and beyond.

Francis' EDM journey started in the 2000s until he made a significant breakthrough via his collaboration with Diplo for the track "Que Que". With that, the moombahton genre became an EDM buzzword, propelling Francis's release to places way up there at the Beatport and mainstream music charts. Dillon Francis has played on major music fests like Electric Daisy Carnival, Coachella, Electric Zoo, Ultra, and many more. His most successful release to date is the single "Get Low" with DJ Snake, reaching gold and platinum status in Australia and Canda, and in the US, respectively.

Classically trained cellist Alex Sholler's career turned upside down and inside out when she became Alison Wonderland and started tinkering with electronic music. Since then, she has amassed a huge online following that brought her massive online music streams and views. Wonderland has released a slew of hit tracks and one full-length album that has spawned hits like "U Don't Know", "One More Hit" and "Already Gone".

"Lost My Mind" is the tour that brings together Dillon Francis & Alison Wonderland on a co-headlining tour. Lose it on the dance floor or lose this chance to catch not one but a back-to-back EDM tour de force like no other. Buy your tickets now!