All my Zef cats, look out! Die Antwoord comes to Stage AE on Wednesday 9th August 2017 for a night of rave-rapping mayhem! Catch Ninja, Yo-landi and God (formerly DJ Hi-Tek) on the Love Drug World Tour, supporting the sensational South African groups fifth and final album, The Book of Zef! Don't miss your chance to see these guys – it may well be their last ever tour!!! 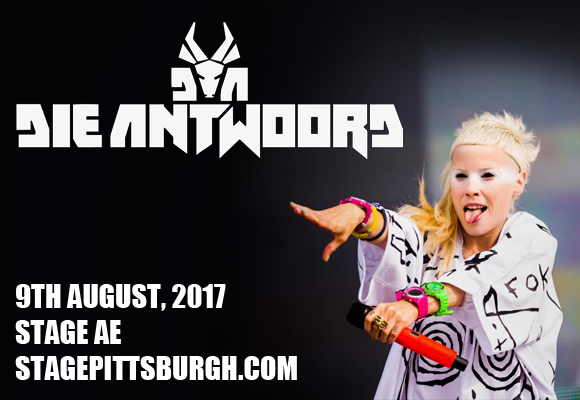 South African rave-rap group Die Antwoord (comprised of Ninja, Yo-landi Vissr and DJ Hi-Tek) was formed in Cape Town in 2008. Attracting international attention for their viral music video “Enter the Ninja,” they released their debut studio album $O$ in 2009. Briefly signed to Interscope Records, Die Antwoord went on to found Zef Records, their own label, in 2011. They have released three studio albums since, Ten$Ion (2012), Donker Mag (2014) and Mount Ninji and da Nice Time Kid (2016), and their fifth and final album, The Book of Zef, will be released in September 2017.