EVENT POSTPONED (date TBA). Hold on to your tickets! They will be valid for the new date once announced.

Daughtry comes to Stage AE on Saturday 20th November 2021 as part of a massive headlining North American tour, promoting their sixth studio album, Dearly Beloved! It's been three years since the band's last full-scale headline tour and fans will be thrilled to hear tracks from the new album live, including the mighty "Lioness"! They'll be joined by an epic support line-up of Sevendust, Tremonti & Travis Bracht! 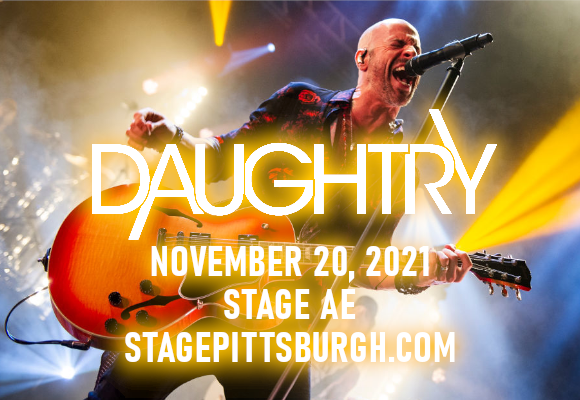 Daughtry is an American rock band, named after lead singer Chris Daughtry who formed the band after signing a deal with 19 Entertainment and RCA Records, having come fourth in the fifth season of American Idol. Their self-titled debut album was released in November 2006 and became the fastest-selling debut rock album in Soundscan history, reaching number one on the Billboard 200, Top Rock Albums, and Hard Rock Albums charts, and number two on the Alternative Albums chart. The album launched seven singles, including four that reached the Top 10 of the Billboard 200. As of 2019, it has been certified six-times platinum by the RIAA. Their sophomore album, Leave This Town (2009), also debuted at number one on the Billboard 200. To date, the band has released six studio albums, its most recent being 2021’s Dearly Beloved. Daughtry has sold over 9 million albums and over 25.6 million digital tracks in the U.S. and has won four American Music Awards and six Billboard Music Awards.