Aussie singer-songwriter Courtney Barnett brings her witty, deadpan songs of rage and vulnerability to Stage AE on Friday 19th October 2018! The artist is touring in support of her second studio album, Tell Me How You Really Feel; a poignant and visceral record that traverses the joy and pain of life with humor, honesty and a lot of bite!

“They’re all pretty real life-y,” Barnett said about the songs on the new album in a recent interview. “Most of what I’m saying on the album can be doubled up. You know how you give your friends advice and you’re like, ‘Why don’t I ever listen to my own advice?’” 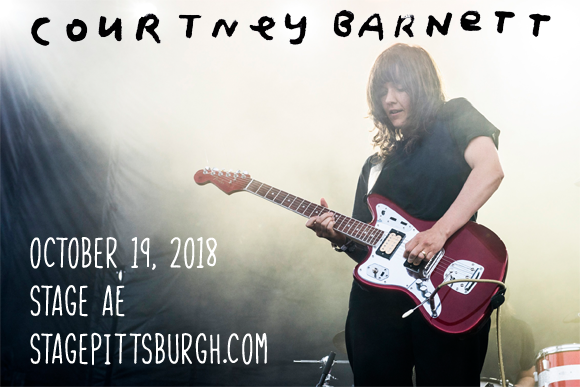 Australian singer, songwriter, and musician Courtney Barnett first came to public attention in 2012 with her self-released debut EP I've Got a Friend called Emily Ferris on her own label, Milk! Records. The following year, a re-release of her debut EP alongside another called How To Carve A Carrot Into a Rose, released as a package titled The Double EP: A Sea of Split Peas, brought Barnett's music to an international audience, and was critically acclaimed by Q Magazine, Pitchfork and Stereogum. Barnett's debut album, Sometimes I Sit and Think, and Sometimes I Just Sit, came two years later and also garnered widespread acclaim. At the ARIA Music Awards of 2015, she was nominated for eight awards, winning four. Barnett was also nominated for Best New Artist at the 58th Annual Grammy Awards and for International Female Solo Artist at the 2016 Brit Awards. 2017 saw a collaborative effort from Barnett – an album called Lotta See Lice, written and performed with American singer, songwriter, multi-instrumentalist and record producer Kurt Vile. Barnett's second studio album, Tell Me How You Really Feel, was released on 18 May 2018, following the singles "Nameless, Faceless", "Need a Little Time" and “Sunday Roast”.