Get ready to kick start your Spring with the incredible Blue-eyed soul rockers – Cold War Kids as they gear up for a huge year ahead with a brand new album on the way and a fresh batch of U.S. tour dates! The California-based indie kings will hit Stage AE on Tuesday 17th March!

Seeing these guys perform is a classic concert experience and gives fans a chance to rock out… tickets on sale NOW! 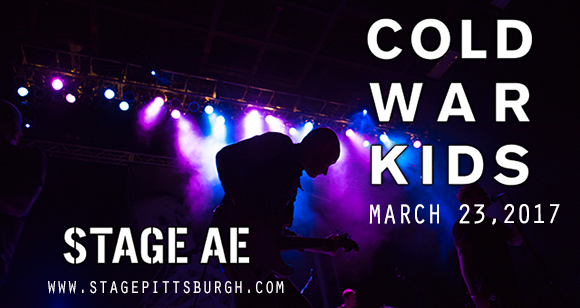 Since they exploded onto the music scene with their debut album, Robbers & Cowards that hit the cult appeal in Indie Rock, almost 13 years ago! This band continues to bring out the anthems, one after the other, and each time comes a record, comes a LIVE tour. 2017 is going to be yet another unstoppable year for the group, so be sure to get involved in anyway you can – especially by catching them as they stop off at a venue near you.