With fellow prog rockers The Dear Hunter, as of April 11 Coheed and Cambria will embark upon a 2017 tour that will have them playing in the Fillmore Auditorium on Sunday April 23rd. What makes this show so special is that they will be playing the entirety of their bestselling third album, “Good Apollo, I'm Burning Star IV” – a must see show for any fan of concept metal! 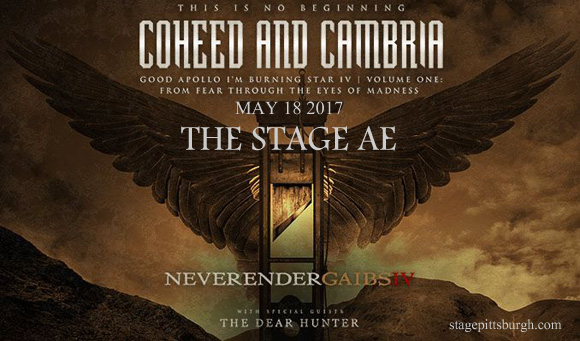 The science fiction storyline “Armory Wars,” written by Claudio Sanchez, the band's frontman, which has been made into a comic book series and a seperate full novel and generated a huge fan following, forms the base material around which the band's work is constructed; everything from lyrics to mood to instrumentation helps to tell the story of the characters involved. As an audience member, listening to “Good Apollo, I'm Burning Star IV” being played live will take you on a storytelling journey with the characters through music. The tour coincides with a soon-to-be-released comic series based on the Good Apollo album, news that will excite all fans of the band!

Former member of post-hardcore band The Receiving End Of Sirens, Casey Crescenzo began the Dear Hunter as a side project that then developed into a full-fledged band with more members being recruited as time went on. The main story arc is set around albums named “Acts” that tell the tale of the eponymous “Dear Hunter” character, following his life from birth to death. They've also released another, non-conceptual album, together with the start of a new arc themed around the rainbow and color spectrum – this band have no lack of ambition!!

For progressive metal lovers and fans of science fiction and comic books, this is bound to be an unmissable experience – grab tickets while they last!!