Renegade country singer Cody Jinks comes to Stage AE on Friday 14th December 2018 with his hard-livin' lyrics and his outlaw sound, ready to get the crowd going! Celebrating the release of Lifers, his 2018 follow-up to the critically acclaimed I'm Not the Devil (2016), Jinks has brand new material to bring to the stage, and with his relentless tour schedule, he sure knows how to give a damn good show! Tickets available now! 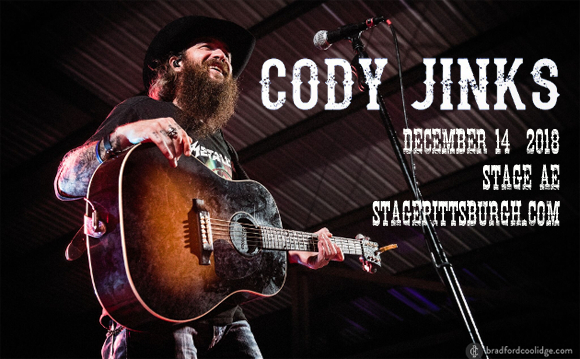 American country music singer Cody Jinks began his life in music as the lead singer and lead guitarist of the thrash metal band Unchecked Aggression, who hail from his home town of Fort Worth, Texas. Jinks released one album with band, The Massacre Begins (2002), and was a member of the band from its formation in 1998 until its disbandment in 2003. Playing with his backing band, the Tone Deaf Hippies, Jinks made his country debut in 2008 with the album Collector's Item. I'm Not the Devil (2016), Jinks' seventh studio album, debuted at number four on the Top Country Albums chart, selling 11,300 copies in the first week, and was rated one the best country albums of 2016 by Rolling Stone. Jinks signed to Rounder Records in 2018 and recently released his eighth studio album, Lifers, with the label.